On July 11, police found the body of 10 year old Reda. The boy had been raped and brutally killed. 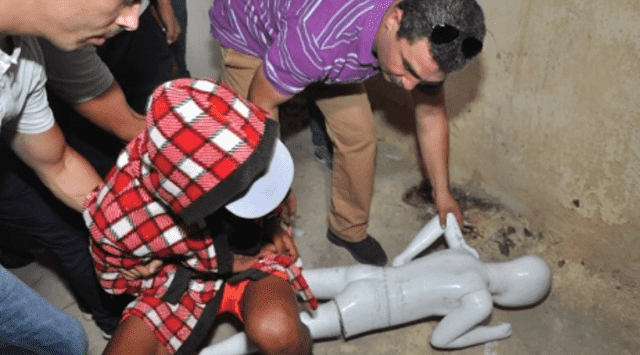 On July 14, amid heightened security, the 35-year-old main suspect in the rape and murder of the 10-year-old Reda in Meknes reconstructed the scene of his crime.

The child was found dead and abandoned in a building near Sahrij Swani in Meknes on July 11.

Police who found the victim’s body reported that he had been choked with an electric cable. His body showed signs of sexual and physical violence.

The main suspect, known as “Biour”, has a criminal record. The suspect’s record includes premeditated murder as well as physical and sexual assaults.

According to a Youtube video of the crime scene reconstruction, “Biour” lured the victim to the door of the abandoned building. He then forcibly pushed the victim inside by choking him as he resisted.

Once inside the building, “Biour” tied his victim’s hands and raped him alternately with another suspect, known as “Haska.” The latter is still subject to a search warrant.

Afterwards, “Biour” hit the child’s head three times using a wooden stick, followed by “Haska” who did the same with a stone.

At the end, “Biour” tied his victim’s neck to the iron bars of a window using an electric cable ensuring the death of the child.

The third suspect, referred to as “Ramjani,” is a 17-year-old minor. While “Biour” spontaneously told the crime’s details, in the video, “Ramjani” appeared reluctant.

In the crime scene footage, “Ramjani,” standing at the door of the building, said that he had fled the scene before the victim was killed.

“Ramjani” stated that he had discovered the body of the deceased after he tried to discover what was happening in the building.

He then admitted that he had found the first two suspects raping the child and “could not run to inform the police.”

“I feared they would do the same to me; I did not do it, they forced me to rape him too,” he added.

The Public Prosecutor’s Office in the court of appeal in Meknes ordered the detention of both of the accused in “Toulal” prison pending trial.