US president Donald Trump stands by his tweets calling for four American congresswomen to “go home.” At a press conference he added that “many people agree.”

Rabat – On Sunday, July 14, US President Donald Trump made headlines with a barrage of tweets which targeted at four democratic congresswomen, who are all ethnic minorities. The tweets caused a public outcry, with many dubbing the tweets racist and xenophobic.

“So interesting to see ‘Progressive’ Democrat Congresswomen, who originally came from countries whose governments are a complete and total catastrophe, the worst, most corrupt and inept anywhere in the world (if they even have a functioning government at all), now loudly and viciously telling the people of the United States, the greatest and most powerful Nation on earth, how our government is to be run,” the US president tweeted.

“Why don’t they go back and help fix the totally broken and crime infested places from which they came. Then come back and show us how ..it is done,” he added.

“These places need your help badly, you can’t leave fast enough. I’m sure that Nancy Pelosi would be very happy to quickly work out free travel arrangements!”

The congresswomen clapback: “THIS is what racism looks like”

While he did not explicitly name the women, the context makes it clear who he meant.

The four women he was targeting, Alexandria Ocasio-Cortez of New York, Ilhan Omar of Minnesota, Ayanna Pressley of Massachusetts, and Rashida Tlaib of Michigan, who were all born in the US with the exception of Omar who came to the US as a refugee from Somali aged 12, have hit back at Trump. 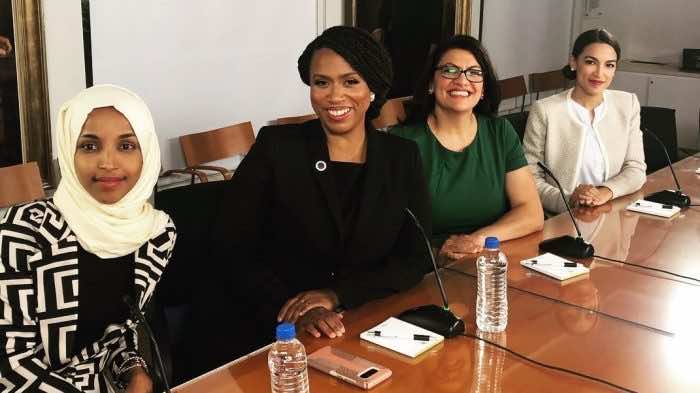 Ocasio-Cortez, who is of Puerto Rican descent but was born in the Bronx just 12 miles from the hospital Trump was born, replied saying: “You are angry because you can’t conceive of an America that includes us.”

You are angry because you can’t conceive of an America that includes us. You rely on a frightened America for your plunder.

You won’t accept a nation that sees healthcare as a right or education as a #1 priority, especially where we’re the ones fighting for it.

Yet here we are.

Pressley, who is an African American born in Ohio, also hit back on twitter, saying: “THIS is what racism looks like.”

THIS is what racism looks like. WE are what democracy looks like. And we’re not going anywhere. Except back to DC to fight for the families you marginalize and vilify everyday. pic.twitter.com/vYzoxCgN0X

Omar also replied, calling Trump the “most corrupt and inept president” president the US has ever seen, and accused him of stoking white nationalism.

As Members of Congress, the only country we swear an oath to is the United States.

Which is why we are fighting to protect it from the worst, most corrupt and inept president we have ever seen. https://t.co/FBygHa2QTt

You are stoking white nationalism bc you are angry that people like us are serving in Congress and fighting against your hate-filled agenda.

“America's answer to the intolerant man is diversity, the very diversity which our heritage of religious freedom has inspired.” -RFK

Lastly, Taib, who was born in was born in Detroit to Palestinian parents and was the second ever Muslim woman to be elected in to congress after Omar, tweeted: “I am fighting against corruption in OUR country.”

Yo @realDonaldTrump, I am fighting corruption in OUR country. I do it every day when I hold your admin accountable as a U.S. Congresswoman. Detroit taught me how to fight for the communities you continue to degrade & attack. Keep talking, you’ll be out of the WH soon. #TickTock

Trump doubles down on comments amid Replubican party silence

Despite the backlash, on Monday, July 15, Trump stood by his statements during a press conference in front of the White House.

“These are people that in my opinion hate our country,” President Trump told reporters. “As far as I’m concerned if you hate our country, if you’re not happy here, you can leave. You can leave right now. I don’t know who’s going to miss ’em,” he said.

When asked by one reporter whether he was concerned about people dubbing his tweets racist, he responded: “It doesn’t concern me because many people agree with me.”

In response, the four democrats also called a press conference on Capitol Hill that afternoon. “We don’t leave the things that we love,” said Ocasio-Cortez. “We are focused on making it better.”

Pressley shared a similar sentiment, and encouraged “the American people and all of us in this room and beyond to not take the bait.

“This is a disruptive distraction from the issues of concern and consequences to the American people,” said Pressley.

Omar simply described his comments as “ridiculous.” This is his plan to pit us against each other.” she added.

The press conference seemed to only further anger Trump, who went on another Twitter tirade, today, July 16. “Those Tweets were NOT Racist. I don’t have a Racist bone in my body!” Trump insisted.

Those Tweets were NOT Racist. I don’t have a Racist bone in my body! The so-called vote to be taken is a Democrat con game. Republicans should not show “weakness” and fall into their trap. This should be a vote on the filthy language, statements and lies told by the Democrat…..

…..Congresswomen, who I truly believe, based on their actions, hate our Country. Get a list of the HORRIBLE things they have said. Omar is polling at 8%, Cortez at 21%. Nancy Pelosi tried to push them away, but now they are forever wedded to the Democrat Party. See you in 2020!

While the Democratic party was vocal and quick to denounce Trump’s statements, his own party remained mostly silent, except for two who condemned the tweets.

Republican Senator Susan Collins said in a statement the tweets were “way over the line” and should be removed. Republican Congressman Will Hurd, who is African American, described the comments as “racist and xenophobic.”

But one Republican, Congressman Andy Harris, defended Trump. Speaking to a radio station, said: “Clearly it’s not a racist comment. He could have meant go back to the district they came from, the neighbourhood they came from.”