The Minister of Education, Said Amzazi has called the adoption of this framework law a “historical moment.”

Rabat – The Moroccan parliamentary commission for teaching, culture, and communication has approved a new framework law for education. The framework law allows for technical subjects to be taught in foreign languages, and require Tamazight to be taught to all Moroccans.

The parliamentary commission approved the framework law by a vast majority. 25 voted in favour of the new law, while two voted against the framework. There were also three abstentions.

The commission was, however, divided on two controversial provisions. A number of members of parliament abstained from voting for Article 2 and Article 31, which were only approved by 12 and 11 votes respectively.

Article 2 specifies that scientific and technical subjects can now be taught in foreign languages through a pedagogy called “Linguistic Alternation” (the equivalent of Content Language Integrated Learning).

The article defines the “Linguistic Alternation” method as a “progressive educational choice used in multilingual education, in an aim to diversify the teaching of languages.”

However, the framework stresses that this new method should be followed “while prioritizing Morocco’s two official languages [Arabic and Tamazight (Berber)].”

Article 2 adds that this reform “will be carried out through teaching some subjects, in particular scientific or technical subjects, or chapters of certain subjects in one or more foreign languages.”

Article 31 relates to teaching Tamazight in school. It states that “upon completing high school, students should have mastered both Arabic and Tamazight in addition to two foreign languages.”

The law also states that, “all foreign schools based in Morocco are required to teach Arabic and Tamazight to the Moroccan children enrolled in classes.” The framework does not appear to apply to foreign students.

Choice of language in schools

The new framework law promotes multilingual education. The choice of foreign language, and its integration into the curriculum will then be a matter of choice for the school.

Teaching in languages other than Arabic has raised controversy. Some schools already teach scientific subjects in French. Some say this entrenches disadvantage when it comes to accessing higher education which is delivered in French.

In January 2015, the Higher Council of Education discussed prioritizing teaching English over French as a foreign language.

For some, English is an “international” language which will provide students with a competitive advantage.

“The mastery of this language is crucial as the majority of international conferences and scientific journals are in English,” he added. “In the job market, it is the linguistic dimension that makes the difference between two otherwise equal candidates,” he explained.

The Minister for Education Said Amzazi stated that the approval of the legal framework today was a “historical moment.”

It is the first time that the education sector will have its own legal framework, which is a first step towards the Moroccan education system “taking off,” Amzazi told Maghreb Arab Press (MAP).

The legal framework aims to promote access to equal education for all Moroccan children. 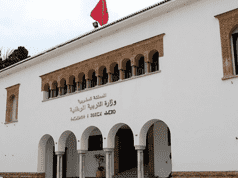