For Morocco, rekindling ties with Uganda comes as yet another important step forward in the realization of its African gaze. 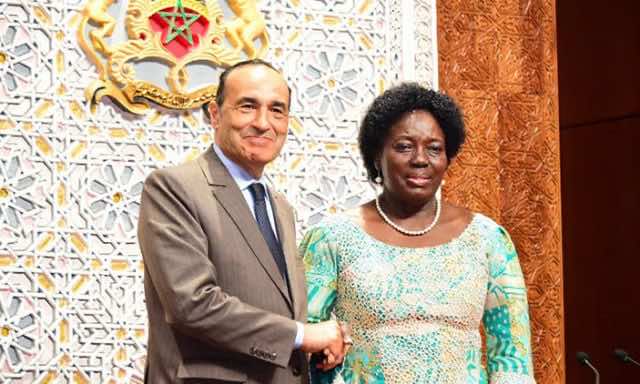 Rabat – The governments of Morocco and Uganda have expressed their shared enthusiasm for establishing strong diplomatic relations. The two governments wish to rekindle “parliamentary diplomacy” and facilitate cooperation on a number of development-related issues.

He said Morocco would be happy to share with Uganda its experience in coming to terms with challenges in a wide range of sectors, including education, security, insurance, and agriculture.

El Othmani, speaking animatedly of Morocco’s increasingly active role in Africa, said that the country has a genuine interest in taking part and playing a much bigger role in the advancement of the African continent, which it considers its “home.”

He described the prospective diplomatic breakthrough with Uganda as a logical extension of Morocco’s eagerness to improve relations with the rest of Africa.

Alitwala, who is heading a parliamentary delegation tasked with laying the groundwork of increased diplomatic relations with Morocco, emphasized the need to invest in “parliamentary diplomacy.”

This, she argued, would be an effective way of ironing out differences and bridging the gaps of any divergence that may have kept the two countries from engaging with one another for four decades. Reiterating El Othmani’s most important points, she highlighted the advantage that both countries will gain from strengthening their bilateral connections.

The Ugandan MP spoke about the need for increased exposure to each other’s realities as the basis for a strong bilateral cooperation. Her country, she stressed, has indeed a lot to learn from Morocco in areas like education and banking. To do so, she proposed establishing an exchange program for Moroccan and Ugandan students to learn more about their two countries

After 40 years when “nothing much has been going on” between the two countries, she argued, the desire from both countries to commit to much stronger relations would require solid institutional foundations. “The bilateral is something we need to develop,” she said.

For Morocco, rekindling ties with Uganda comes as yet another important step forward in the realization of its African gaze.

Since the North African country reunited with its fellow African countries in January 2018, when it joined the African Union, cooperation with Africa seems to have emerged as perhaps the foundational pillar of Morocco’s identity in the international arena.

“For us, cooperating with the rest of Africa is not only a desire; it is a priority,” one high-ranking Moroccan official said recently.

El Othmani echoed that sentiment throughout his meeting with Alitwala. He noted that “commitment to Africa” is of paramount importance to King Mohammed VI, the main initiator of what has come to be known as Morocco’s “royal diplomacy” aimed at asserting the kingdom’s Africanness.