Moroccans MPs are routinely criticized for standing for their own interests rather than those of the constituencies they are supposed to be representing. 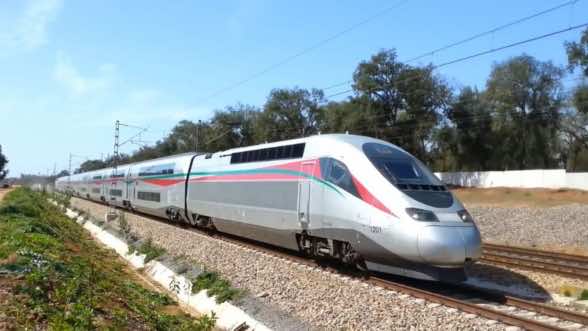 Rabat – Not satisfied with their already overflowing bags of privileges, Moroccan MPs are pushing to be granted free rides onboard Al Boraq, the country’s newly inaugurated high speed train.

Moroccan Arabic language newspaper Al Akhbar reported in its July 17 edition that all 515 members of the two houses of the Moroccan parliament have requested that they be given a free pass to the new high speed train.

Organized in small committees, the MPs addressed written requests to Habib El Malki and Hakim Benchemass, respectively presidents of the upper and lower houses of the Moroccan parliament. The two presidents, who would also benefit from the move should it pass into action, immediately green lighted it, according to Al Akhbar.

The newspaper sardonically commented on how, at a Moroccan parliament where some of the most trivial questions take weeks and months of debates, sometimes ending with no conclusive decisions, MPs’ request in favor of a better treatment for themselves passed both houses in the blink of an eye.

More still, the request was met with  an absolute majority of votes approving the policy, a rare, if not impossible occurrence for a parliament where it is common for MPs of the same party to disagree on policy actions at the moment of voting.

While the move is yet to be implemented, the path seems to have been completely cleared for MPs. Rabie Khlie, the director of ONCF, Morocco’s national rail operator, has also given his approval.

According to Al Akhbar, the ONCF director has said that his institution would happily print out free access cards for the MPs to travel onboard Al Boraq at will. This comes as an uncalled for addition to an already overflowing pile of privileges for Moroccan MPs.

A Moroccan MP is paid a monthly wage of MAD 32,800. That amount is increased by MAD 7000 if the MP occupies another function within either of the two houses (vice president or president of the parliament’s committee on education, for example).

In addition, all MPs have free access to regular trains (first class), a monthly allowance of MAD 800 for fuel, and a MAD 700 hotel room in Rabat paid for by the taxpayer’s money. They do not pay for motorway tolls charges and are paid MAD 2000 as pocket money when traveling abroad.

The size of the entitlement pie gets even bigger for the presidents of the two houses. They are each paid MAD 42,000 per month, benefit from the above mentioned rights, in addition to a much more significant housing allowance.

The move is  set to be interpreted as yet another illustration of critics’ point that the seats of the Moroccan parliament are filled with MPs who entered politics for their own sake, rather than for speaking on behalf of their low-income, sometimes poverty-stricken constituents.

Moroccans MPs are routinely criticized for standing up for their own interests rather than those of the constituencies they are supposed to be representing. They enter politics for personal advantages and not for defending political convictions they may have, critics have maintained.

When King Mohammed VI and France’s Emmanuel Macron inaugurated Al Boraq in November of last year, many critics said the project was a luxury the country did not need, could not afford.

Rather than meeting important challenges like reducing poverty or bridging the expanding disconnect between extremely rich and low-income families, they said, Al Boraq was another illustration of the existence of “two Moroccos.”

Adherents to the Al Boraq project shunned the criticism of the whole project being a luxury the country did not need.

One Al Boraq user, Hassan, told Morocco World News in December of last year: “Those who say that it is all about prestige are right. But they are missing something important: Prestige counts for an emerging country that aspires to greatness, to big development plans.”

But even Hassan, for all his passion and enthusiasm for Al Boraq, acknowledged that the new train would make “visible,” affluent Moroccans much more satisfied with the grand projects the country has achieved in recent years. Meanwhile, though, nothing much would change in the lives of the other, less visible Moroccans. “This is Morocco,” he lamented.

As MPs delight in adding another privilege to their already overloaded baskets of entitlements, “this is Morocco” is set to come across as the continuation of policies that add to the privileges of the well-off, while doing little for those in need of government intervention.