Trump seemed at a loss when Murad asked him to press the Kurdish and Iraqi governments to help the Yazidi people return safely to their homeland. 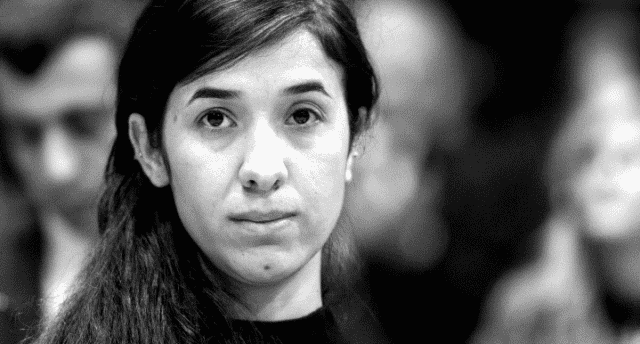 Rabat – On Wednesday, Nadia Murad, a former IS prisoner who won Nobel Peace Prize last year for her efforts to end the use of sexual violence as a weapon of war and armed conflict, met with US President Donald Trump on Wednesday, July 17, to plead with him to help the Yazidis of Iraq.

Murad, who belongs to the Yazidi minority, was enslaved and tortured by IS after the terrorist group overran her village on August 15, 2014. She also lost 18 family members that day.

Joined by a group of other survivors of religious persecution who met Trump in the Oval Office on the sidelines of a major meeting at the State Department, Murad explained to Trump how her mother and six brothers were killed in front of her and that 3,000 Yazidis remained missing.

However, Trump seemed unfamiliar with her work, quoted by AFP as replying: “And you had the Nobel Prize? That’s incredible. They gave it to you for what reason?”

After pausing for a moment, Murad explained her story again to the US President and pleaded a second time for Trump to help the Yazidi minority.

“After all this happened to me, I didn’t give up,” she told Trump. “I make it clear to everyone that ISIS raped thousands of Yazidi women. Please do something. It is not about one family.”

However, the conversation did not flow any smoother after she explained a second time and Trump, who boasted in 2018 that he had crushed the self-styled caliphate of ISIS that once stretched across Iraq and Syria, still seemed at a loss when she asked him to press the Kurdish and Iraqi governments to help the Yazidi people return safely to their homeland.

“But ISIS is gone and now it’s Kurdish and who?” Trump asked, before later telling her, “I know the area very well.”

Government ministers and representatives of persecuted groups, Murad included, are currently spending three days at the State Department for a meeting on religious freedom, which Vice President Mike Pence will address on Thursday.

Murad’s story of escaping IS and fighting for Yazidi rights

Murad’s story has touched the hearts of many, with former UN Secretary-General Ban Ki-Moon being quoted as saying that he was “moved to tears” by the fate of the young woman, as well as by her “strength, courage and dignity.”

After IS started a bloodbath in her village of 2000 people, she was held captive by IS for a total of three months. During this time, she suffered the fate of many other Yazidi women and was used by IS as a sex slave. During this time, she was beaten, tortured, and raped. Unlike many other women who aren’t so fortunate, Murad managed to escape and has been living in Germany since, where many Yazidi refugees settled.

Just under two years later, she was formally appointed as the UN Goodwill Ambassador for the Dignity of Survivors of Human Trafficking in order to draw attention to the suffering of Yazidi women and children still held prisoner by IS.

“I was not alone and perhaps I was the luckiest. Over time, I found a way to escape, while many thousands could not. They are still being held prisoner,” she said as she told her story to the UN in 2016.

“I am here in order to represent those who have been taken from us. We cannot bring them back. We will cherish their memory as we continue to fight.”

She elaborated that the situation was so dire that many of the women took their own lives, but Murad did not. “I did not want to kill myself, but I did want them to kill me.”

Due to her high profile activism, she has received death threats from IS according to DW Middle East, although death does not scare her. “Death is harmless in comparison to the hell that we all had to endure,” she said.

In 2018, the 25-year-old became the second-youngest Nobel Peace Prize laureate in history. She was honored along with Congolese doctor Denis Mukwege for their efforts to end the use of sexual violence as a weapon of war and armed conflict.