At a brightly-lit table, a young Moroccan man bites into a grilled tortilla wrap filled with chicken nuggets, honey mustard, and French fries — which he knows as a taco. 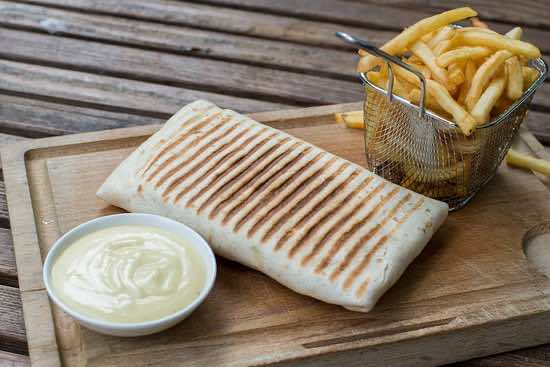 Rabat – Mohamed Mahna, a Masters student in Rabat, arched an eyebrow when asked about the tacos’ origin.

“I don’t know what nationality it is. I just enjoy it, but I have never asked myself,” Mahna said with a slight smile. “As long as it’s delicious, I don’t care about the rest.”

Tacos in Morocco are not simply a variant of Mexican cuisine that has drifted to North Africa. Instead, the hearty snack is a distinctly multinational fast-food phenomenon — a culinary innovation which reflects how national boundaries are blurring and Moroccan eating habits are changing.

Instead of the ground beef, tomatoes, and cilantro one might find in Mexican tacos, the staples of tacos in Morocco are French fries, chopped meat (such as chicken nuggets), and seldom any vegetables. Wrapped and toasted in a container that more closely resembles a Hot Pocket than a loose tortilla, these fillings are doused in sauces ranging from the gooey “Cheezy Easy” to the spicy “Samouraï.”

Sources dispute the specific origin of this style of tacos, but most agree that the recipe was first created and popularized by Moroccans in southeastern France in the mid-2000s. In 2011, a pair of siblings from a suburb of Lyon moved their shop, Tacos de Lyon, to Casablanca, opening the first “French tacos” shop in Morocco. From there, the new snack came to dominate the Moroccan fast-food scene.

Tacos de Lyon now has 17 locations across the North African country, including five in the capital, Rabat. Rivals like Tacos de Nice, Tacos Mexico, and Royal Tacos also maintain a foothold in the Moroccan capital, and similar products can be found in less formal establishments around the city.

The names of most taco establishments cite France as their country of origin, yet the original creators of the cuisine were Moroccans, and taco shops are perhaps more common in Morocco than in France. To complicate matters, the name is shared with a completely different Mexican dish. So what type of food are these Mediterranean tacos?

“It’s different than Moroccan or French cuisine,” explained Nordine Menssour, manager of a Tacos Avenue franchise in Rabat. “It’s the cuisine of any nationality.”

Indeed, the décor and marketing of most tacos shops in Rabat evoke corporate multinationalism and modernity rather than parochialism or tradition. One evening’s playlist at Tacos Avenue, which began in France and just opened a second Moroccan location, includes French pop-rap, a collaboration between the Dutch DJ Tiësto and American superstar Post Malone, and “Despacito.”

Splashed in funky red lettering on the wall is the English phrase: “Hungry for Life.” The menu includes “Grec” tacos (with feta cheese sprinkled on top) and the “Italien” (garnished with basil and sweet peppers).

The multinational character of these fast-food restaurants is one facet of the increased penetration of corporate chains into the expanding Moroccan market. McDonald’s came to Casablanca in 1992 and now maintains 44 locations in Morocco; other chains like Pizza Hut and KFC also operate in the North African country. Frequent taco shop visitor Mohamed Mahna believes the new dining options are influencing eating habits in the nation’s cities.

“In Morocco, we are very traditional; we don’t trust such [fast food] places because we believe there are a lot of chemicals that they use to cook, so we prefer to stay at home and cook things we know — healthy food,” Mahna said. “But now things are changing.”

Rather than eating at home or visiting street vendors, many Moroccans are frequenting the new fast-food franchises springing up in the cities. The franchise owner Menssour claimed that customers choose these fast food stores because they use better ingredients than are available in other establishments — although a basic taco costs 30 to 50 Moroccan dirhams, or $3-5, much more expensive than a 10 to 15-dirham bocadillos street sandwich.

“In the medina everything is basic… The quality is not the same, so the price [at fast-food restaurants] is a little higher. We use quality ingredients, even if they must be imported from outside Morocco,” Menssour argued.

Mahna pointed instead to the convenience of tacos shops as a motivating factor.

“To save time, you just go to fast food and you grab something to eat,” Mahna said. “We cook on special occasions, but for the most part, fast food can serve the purpose, especially on active days.”

Whatever the reasons for their popularity, tacos are ubiquitous in Rabat; a 900-meter stroll along Hassan II, a main boulevard of Rabat, reveals nine different shops with tacos on the menu, and the snack can be found in every quarter of the city.

Because of tacos’ complex origins and status as fast food, the innovative dish may never be claimed as the cuisine of any nation. But despite its indeterminate origin, tacos continue to impact Moroccan eating habits and culinary culture – just expect Moroccans visiting Mexico to be confused.

“No, I have never seen food like this,” Mahna said after peering at a picture of Mexican tacos. “Maybe I have seen something like this in National Geographic.” 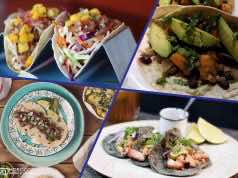