Despite Uganda’s support of the Polisario Front and the self-proclaimed “SADR,” Ugandan Parliament Speaker Rebecca Kadaga Altiwala is beginning a new chapter in the country’s relations with Morocco.

Altiwala has visited Morocco twice during the past four months. Her most recent meeting with the head of the Moroccan government, Saadeddine El Othmani, and the Minister of Foreign Affairs, Nasser Bourita, took place in July 2019.

Altiwala, who visited Morocco with a parliamentary delegation, expressed willingness to benefit from the Moroccan experience in addressing the various challenges Uganda is currently facing. They discussed the fields of education, health, and the development of agricultural products.

The two parties declared their shared desire to bolster the relations of friendship, consultation, and cooperation, through the exchange of visits of officials. They also plan to enhance the partnership through the strengthening of parliamentary diplomacy, the building of cultural bridges, as well as the exploration of partnership opportunities offered by the countries’ economies.

During her last visit to the North African country, the Ugandan politician also met with the chairman of the Royal Advisory Council for Saharan Affairs (CORCAS), Khalihenna Ould Errachid, in Rabat. Their discussions included the latest developments in the Western Sahara conflict.

Ould Errachid  briefed Altiwala on the Moroccan Autonomy Plan proposed for Sahara, which was submitted to the UN in 2007; The UNwelcomed as “serious, credible and realistic” by the international community and the African countries

Altiwala’s visits to Morocco and her discussions with CORCAS over the Western Saharan territory, contradict the foreign policy adopted by Ugandan President Yoweri Museveni. Museveni  has backed the Polisario Front for 33 years.

During the Southern African Development Community (SADC) conference held on March 2019 to support the Polisario, the Ugandan President reinforced the position of the separatist movement while he criticized Morocco’s stance on the Western Sahara conflict.

In May 2019, Museveni received in Kampala the Front’s newly appointed ambassador to Uganda, Hammadi Bashir.  This accelerated the Ugandan government’s efforts to uphold the self-proclaimed SADR.

The 75-year-old Ugandan President is planning to bid for a sixth presidential term in 2021.

In November 2018, the Ugandan media reported that the country’s former ministers highly encouraged Rebecca Kadaga Altiwala to run for the 2021 presidential election.

The Speaker of the Ugandan Parliament is determined to solidify Uganda’s ties with Morocco.

Altiwala has invited her Moroccan counterpart to participate in the 64th session of the Commonwealth Parliamentary Assembly held on 22-29 September in Kampala.

She also promised to launch a direct airline route between Morocco and Uganda. 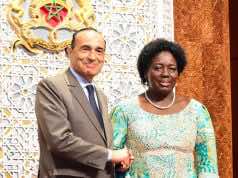