The Central Bureau of Judicial Investigations (BCIJ) arrested 5 members of a terrorist cell with links to ISIS.

Rabat – The Central Bureau of Judicial Investigations (BCIJ) under the Directorate General of Territorial Surveillance (DGST) succeeded today, July 27, in dismantling a terrorist cell in the city of Tangier.

The cell is composed of five extremists aged between 24 and 36 years, among them a veteran who fought in the ranks of the Islamic State in Iraq and Syria (ISIS).

In a statement, BCIJ said their investigation found that the cell members were in contact with ISIS and had pledged allegiance to the terrorist group.

“The extremists coordinated and planned to target several sensitive sites in the kingdom,” adds the statement.

The arrests are part of the BCIJ strategy. The strategy aims to neutralize suspects before they carry out their operations.

According to Al Ahdath Al Maghribia’s July 27 issue, the BCIJ was able to neutralize,  in one week only,  twenty extremists planning acts of terror. The arrests took place in several cities including Safi, Rabat, Casablanca. 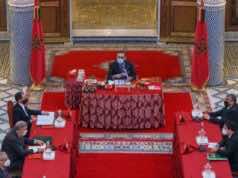