A Dutch law banning facial coverings in public institutions came into force on August 1. Amid criticism, how it will be enforced remains to be seen.

Rabat – The law banning facial coverings in government buildings, schools, and on public transport comes into effect in the Netherlands on August 1. The law does not apply to public streets.

The law targets clothing that completely covers the face or “covers it in such a way that only the eyes can be seen.” It therefore applies to the burqa, the niqab, as well as motor helmets and ski masks. Offenders are now subject to a 150 euro ($166) fine.

The Netherlands has a population of approximately 17 million, and it is estimated that somewhere between 100 and 400 people wear a niqab or burqa.

According to a statement from the Dutch police issued on July 31, public institutions will be responsible for enforcement of the new law.

“Verification of compliance with this prohibition lies with the employees of the institution where the prohibition applies and with the personnel of the transport company,” the police say.

Read Also: The Difference Between the Hijab, the Niqab and the Burqa

“They are expected to address offenders, point out the existence of the prohibition and request them to remove the face covering or otherwise leave the premises,” the statement adds.

The Ban on Facial Coverings

The ban on facial coverings is controversial, and how it will be applied in practice remains to be seen.

For the Dutch Federation of University Medical Centers, hospitals “should not be charged with this task, but it is up to the police and the judiciary,” reports Dutch news source NOS.

Amsterdam’s OLVG hospital group has said it will not take action. “Our policy is, if care is need, then that is what we will provide,” hospital spokeswoman Elles in‘t Hout told the Dutch newspaper NRC.

Representatives of the transport industry have also said they will not enforce the ban, citing worries over disruption to services if police assistance is required, reports NOS.

When the law was voted in mid last year, critics, including Annelies Moors, professor of Anthropology and Sociology at the University of Amsterdam, warned the ban could dissuade some women from entering public spaces.

Under the law, people wearing a burqa can for example no longer enter a police station to report a crime.

The Dutch police have reassured that in this situation, “there are several options,” being making a declaration by phone or by the internet.

Where phone or internet reporting is not an option however then the police explains that “you must cooperate by taking off the clothing that covers your face.”

In public transport and in educational institutes, healthcare and government, “it is important for social safety and services that everyone can recognize and look at each other,” the Dutch police statement adds. 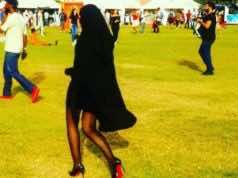