American clothing retailer Banana Republic launched four styles of hijabs this week. Not all were happy with the brand’s campaign images.

Rabat – Banana Republic launched a line of hijabs on Tuesday, August 30. The American retail giant added four styles of plain colored and patterned hijabs, the head coverings some Muslim women choose to wear, to the “accessories” section of its website.

Banana Republic’s joins other retail giants who are moving towards more inclusive brand depictions and clothing lines. In 2017, Nike released a sports hijab line, and last year, GAP released a promotional “back to school” ad campaign showing a little girl wearing a hijab.

Elturk shared the first images from Banana Republic’s website on her Instagram, writing: “While I LOVE that hijab is becoming more mainstream and applaud @bananarepublic for their efforts in inclusivity… I have to pause at the way it’s portrayed.”

“There are guidelines to hijab outside of just covering hair,” she noted.

“All it would have taken was a consultation with a Muslim brand or group to advise in order to do it right and respect our values. So while this excited me as someone who’s life mission is to normalize hijab in the mainstream, I also think it’s important we keep the essence of hijab intact for ourselves and our future generations,” she added.

“I’m out here on… all these platforms to explain the importance of getting the right people to consult for brands that want to tap into the ‘Muslim dollar’ and then this happens. Why are these errors happening still?” she questioned.

Idrissi made headlines back in 2015 when she became the first model to wear a hijab in a major international fashion campaign for H&M.

Banana Republic has removed the two images in question from its website. The brand has not released a statement on the matter. 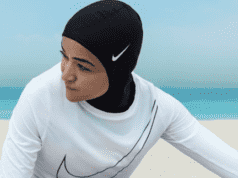 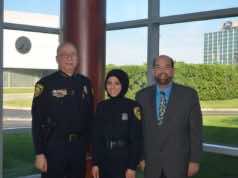