Rabat – As the world’s population increases, countries are facing growing environmental challenges. A big issue is “waste,” and what to do with all of the unwanted products that are being generated by human consumption.

Plastic, paper, food, metal, everything, where does it all go?

The World Bank expects humans to generate a staggering 3.4 billion tons of waste annually by 2050. This would represent an increase of 70% since 2016.

Morocco is one of the lowest producers of solid waste in the Middle East and North Africa regions, at 550 grams of waste per person per day in 2016. However, with a population of over 35 million people, the waste still adds up to millions of tons a day.

Once Morocco’s waste is collected, where does it all go? Right now, to open dumps, landfills and most recently, under a new government initiative, to “valorization centers.” These modified landfills capture methane that comes from the fermentation of the waste, and burn it to produce heat. Once this is done, the leftover waste is buried.

The concept of a national-scale waste sorting and recycling is still in its infancy. According to a report published by the Moroccan Ministry for Mines and Sustainable Development, in 2015 only 6% of Morocco’s recyclable waste was actually recycled.

This means that, by and large, most of Morocco’s waste ends up in landfill.

Morocco’s most infamous landfill, the Mediouna landfill, is on the outskirts of Casablanca. Covering an area of over 70 hectares, it receives 1.2 million tons of waste per year. The toxic fumes waft over to neighboring suburbs, poisoning the air and forcing some people to relocate.

Born and raised in Agadir in southern Morocco, Kabbaj is currently an associate partner at MINA Connect, a management and consulting firm based in Pennsylvania, USA.

The firm provides project management services and operational support for projects in the areas of water, environment and renewable energy, with a particular focus on African initiatives. Kabbaj is interested in waste management solutions.

“Casablanca just throws its waste into the Mediouna landfill. And now the landfill is facing big issues. It’s going to arrive at 99% saturation,” he warns.

“Casablanca is a fast growing city. Landfill is just not suitable for this city anymore.”

Landfills like Mediouna can’t be filled up indefinitely and space around cities for more landfills is limited. So Kabbaj has been thinking about alternatives.

Waste-to-energy plants use combustion technology to burn waste in order to generate steam, electricity, and hot water. Hundreds of these plants already exist around the world, transforming waste from major cities across Europe, Asia, the US, and most recently Africa, into energy.

“Other big cities do their treatment through “waste-to-energy plants” because they have a lot of advantages. For example, the plants save on land. A plant only uses four to eight hectares of land, unlike the 100 hectares required for landfill. Also, it treats the waste using the best technology in the world, reducing its volume by up to 90%,” he explains.

What about carbon emissions? Kabbaj says the technology is clean, and plants are subject to strict emission regulations.

In August last year, Ethiopia opened Africa’s first waste-to-energy plant on the outskirts of the capital Addis Ababa. The “Reppie waste-to-energy facility” is built on the Koshe landfill site, which was previously a sprawling open air dump, covering an area approximately the size of 36 football pitches.

The $118 million plant was built through a public-private partnership between Ethiopian Electric Power and a foreign consortium made up of China National Electric Engineering Company (CNEEC), Cambridge Industries Limited from Singapore, and Ramboll, a Danish engineering firm. The plant ceased operations shortly after its inauguration because of a contractual dispute, but some news sources reported in April that Ethiopia Electric Power “is planning to restart operations.”

The plant is designed to incinerate 1400 tons of waste a day, and when it eventually operates, it will do so within the CO2 emission limits of the European Union.

“[Ethiopians] show us the way that we Africans need to act,” says Kabbaj.

He believes Morocco is a prime-candidate for Africa’s second waste-to-energy plant. He makes it sound like it is only a matter of time before the technology comes to Morocco.

A few things do stand in the way though, he adds.

The government will need to make some changes to Morocco’s legal framework, Kabbaj explains. The public-private-partnership law does not currently allow Moroccan municipalities to enter into these types of public-private contracts. Given municipalities are in charge of waste management, the law will need to be amended so that they can sign these types of contracts, he says.

Then it will be about convincing all the relevant stakeholders about the idea.

“I do remember the first day I introduced the technology in 2016 after the COP22 [international climate change conference] to the main stakeholders and municipalities. I was told it could not be done because the calorific value of Moroccan waste is so low due to high content of organics and it would be too expensive,” Kabbaj explains.

He then explains that his feasibility studies eventually showed decision-makers that the technology was actually a reliable solution.

“Based on my experience, people working in the ministries realize [waste-to-energy] is the best option, but the challenge is that there are a lot of stakeholders who all need to be convinced,” he says.

Funding is also an issue. One small plant costs on average $120 million. But according to Kabbaj, there are plenty of private companies interested in this type of venture: “the method is to partner with someone who has the expertise to build a waste-management plant.”

Kabbaj’s opinion is clear. According to him, Morocco is ready for waste-to-energy technology. But for the moment a waste-to-energy facility is not on the Moroccan government agenda. If Kabbaj keeps advocating for this solution, maybe it will be soon? 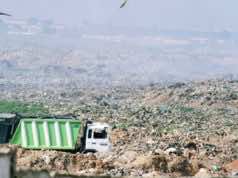