Even as the US still does not have an ambassador in Morocco, Rabat and Washington have remained close allies under President Trump.

Rabat – An important US congressional delegation is expected to visit Morocco today. The visit is part of the visibly increasing push to cement the old, “strategic” bilateral ties between Washington and Rabat.

The delegation, which is headed by Democrat Representative Frank Joseph Pallone, will stay in Morocco for three days during which they are expected to hold meetings with high-ranking Moroccan officials to discuss ways of strengthening the relationship between the two countries, Moroccan outlet Le 360 reported yesterday.

While the visit comes as a further illustration of the profound bilateral ties between the two countries, its main motive has to do with “bolstering legislative and economic cooperation,” the Moroccan paper quoted sources who have been briefed on the matter.

Even as the Trump administration still does not have an ambassador in Morocco, Rabat and Washington have remained close allies under President Trump.

Earlier this week, while congratulating Morocco’s King Mohammed VI on his twentieth year as monarch, President Trump said that Morocco and the US should continue working together to “accomplish a lot” on a wide-range of issues of shared interests.

Trump also spoke of the need to boost, and perhaps honor, “the cultural link between our countries as a testimony of our friendship for more than 240 years.”

The congressional visit comes days after news emerged of a second visit to Morocco by Jared Kushner, President Trump’s son-in-law and Senior Advisor.

Kushner is also the mastermind of President Trump’s infamous, exceedingly pro-Israel “Deal of the century” for the Palestinian-Israeli conflict. Kushner’s second visit, like the first one three months ago, was reportedly an attempt to get Morocco’s support for President Trump’s controversial deal for Palestine.

While the congressional delegation’s visit’s talking points are said to be essentially about boosting the Morocco-US commercial and institutional exchanges, the timing, as well as the visible influx of positive comments from Washington may arise suspicions in some quarters about any links with the push to get Morocco on board with the US on the Palestinian question.

For now, though, Rabat has been clear about its stance on Palestine.

Amid rumors recently that Rabat was considering a change of heart on the Israeli-Palestinian conflict, the Moroccan government rebutted by saying that its close relationship with Washington, as well as its strong desire to remain a reliable US partner, would never get in the way of its “constant support for the Palestinian cause.” 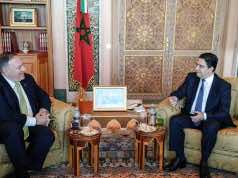