Could King Mohammed VI’s persistence and commitment towards better ties with Algeria be the reason behind this alleged move?

Rabat – An Algerian “sovereign” authority is consulting with academics on the reopening of closed land border with Morocco.

A source quoted by Independent Arabia is expecting “ progress”  in the discussion under “positive” indications from  Morocco.

The Independent Arabia’s sources said that a sovereign authority started its consultations with academics and specialists to discuss the “most effective way to open land border” despite the “outstanding controversial issues” between both countries.

Algeria has long supported the claims of the Polisario Front, which opposes Morocco’s territorial integrity and sovereignty over Western Sahara.

Independent Arabia recalled Morocco’s recent positive rhetoric “free of the language of rivalry between the two neighbors” amid the popular movement in Algeria.

Morocco’s government, however,  had expressed its willingness to open a frank and serious dialogue before the popular movement emerged in Algeria.

In a speech marking the 43rd anniversary of the Green March, King Mohammed VI called on the Algerian government to join a frank dialogue to break the stalemate between the two neighbors.

“I should like to say today, in a very straightforward and responsible way, that Morocco stands ready for a direct and frank dialogue with our sister nation, Algeria, in order to settle the transient and objective differences impeding the development of relations between the two countries,” said King Mohammed VI in his November 6, 2018 speech.

The King renewed his call once again on the eve of Throne Day on July 29.

The monarch said that Morocco has reiterated its  commitment to the “policy of the outstretched hand towards our Agerian brothers, out of loyalty to the bonds of rooted in brotherhood, religion, language and good-neighborliness that have always existed between the peoples of the two sister nations.”

“It was ended with an official letter from King Mohammed VI, who described Algeria’s win as Morocco’s coronation,” Independent Arabia wrote.

In addition to the congratulatory letter, the monarch also expressed Morocco’s commitment to friendship, saying that it was shown through the “the sincere and spontaneous manifestations of friendliness and support expressed by Morocco – its King and its people – for the Algerian national football team at the African Cup of Nations held in our sister country, Egypt.”

Algeria closed the border with Morocco in 1994 after Rabat imposed visa regulations on Algerian citizens. Rabat’s decision came following a terrorist attack on the Atlas Asni Hotel in Marrakech. 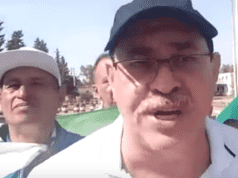