Across the globe millions of Muslims will celebrate Eid this year far away from their homes, and, in many cases, their loved ones.

Rabat – All over the world today, families, friends, and neighbours are gathering to celebrate Eid Al Adha.

Laughter and cheerful voices are warming homes across the globe and tables are  laid, heavy with succulent lamb dishes, local delicacies, and holiday treats. Children put on their best clothes and rush excitedly into the kitchen to see what delicious sweets await them, and their parents greet them with holiday kisses and warm embraces.

Meanwhile, in a field in France a young man wakes up in a tent, cold, and hungry, thousands of miles away from his family. A woman lies in a makeshift shelter on a Greek island, listening to her baby crying, wondering if she will ever see her husband again. A small child stands in the dust playing with a cardboard box, her only toy.

According to statistics from the UNHCR, there are currently 70.8 million displaced people in the world. 41.3 are internally displaced, meaning that they have fled their homes but remain in their country of origin, while 25.9 million have fled to a different country.

Of the 70.8 million, only 3.5 are officially classed as asylum seekers, meaning that the vast majority are living in refugee camps, detention centers, or simply on the streets.

In 2016, I celebrated my first Eid Al Adha, not in a Moroccan home or with my family, but with 30 or more Sudanese men, taking shelter in the sand dunes of Calais, France.  Until October 2016, the Calais ‘Jungle’ camp was home to in excess of 9,000 migrants and refugees. While the French authorities cite a much lower number, aid agencies on the ground including Auberge de Migrants and Help Refugees, who carried out a monthly census, published numbers as high as 14,000.

The sprawling camp was home to refugees and migrants from Sudan, Syria, Afghanistan, Ethiopia, and even Morocco. With limited running water, poor sanitation, and no access to medical care, the thousands of refugees survived with only the clothes on their backs and donations of food and clothes from international aid agencies. It was an informal camp and there was little to no state involvement.

Despite the living conditions and memories of the horror which had caused many of the residents to flee their home countries, the excitement and joy surrounding Eid was palpable.

The Sudanese community began their preparations weeks ahead. These preparations involved the procuring of traditional ingredients, the washing and pressing of the only clothes they had using buckets and pieces of wood in the open air, and inviting friends to join them. I soon realised that, for them, Eid was not about the food or the sacrifice, but about sharing what little they had with those they cared about. Honored to be on the guest list, I too set about looking for something respectable to wear for the occasion.

When the day finally came, laden with meat from the only halal butcher we could find, and hiding cooking equipment under school books, a friend and I arrived at the camp. The armed French riot police, as ever, wanted to search the bags and to see identification. With a permit from the French authorities, I had the right to enter the camp with teaching equipment but not with spices, bamya and several kilos of meat. Having eventually passed a rather aggressive search, we set off down the long dirt track towards the school where I worked, and where the Eid celebrations were due to take place.

No sooner had we lifted the heavy bags but a gang of young men materialized to help us, wearing crisp, clean, and mismatched clothes, and matching expressions of excitement. As we walked towards the compound, one young man, a 21 year old South Sudanese refugee named Ali, told me about what he would be doing were he still at home.

He explained that he and his brothers were responsible for sacrificing and skinning the sheep,and then his mother and sisters would prepare it while the men chatted and cleaned up the mess. Sweet tea would be served and fried doughnuts. He smiled as he recounted how they would laugh, and sometimes they played games too. What he did not say then was that they are now all dead. 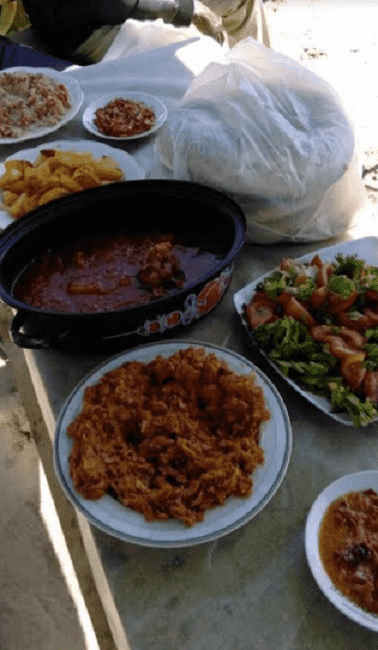 When we reached the compound, I made immediately for the cooking area where a little man called Idris, a professional  chef in his own country, was already instructing several compatriots about the right way to chop onions. He was a rather taciturn individual and it was rare to get a smile from Idris, but he beamed as he saw the contents of the shopping bags. I was given instructions to prepare vast amounts of garlic, smashing it with olive oil in an empty plastic bottle.

The preparations took hours, while the sand swirled around in the cold breeze from the French coast. As we cooked in the makeshift shelter over a fire in an empty oil barrel, one of the Mohammeds, also from South Sudan and aged only 19, told me about playing football with the other boys in his village. An older man called Faisal sang Bob Marley songs as he swept the sand to remove the litter and debris that covered the open space.

Maliq, 25, sang the call to prayer as the other men washed their hands, feet, and heads, helping each other to wash using 5 liter water bottles they had filled at a water station about a ten minute walk away. A little late, Handal and Gamar arrived at the broken wooden gate, pushing a broken trolley filled with water bottles. Abandoning their cargo, they joined the washing ritual ready for prayer before disappearing into the makeshift Mosque, built from discarded pallets, cardboard, and blankets.

Prayers over, it was time for the long awaited meal. Gathering around the tables they had carried out of the little school room, they smiled and laughed as they ate, taking care to offer the choicest morsels to their guests. While sharing the long awaited feast, one could almost forget that we were in a refugee camp. Amidst the laughing, shouting, and eating, the reason that had brought us all to that place was forgotten.

After the meal, an anticlimactic silence fell and we worked together for the clean up. When it was over, we made sweet tea and donuts.  As the light of day faded, so too did the celebratory atmosphere; the tables were returned to their places and the wind was already spreading litter across the sandy courtyard. We sat in silence around the fire in the oil barrel. I added extra sugar to a cup destined for the tallest of the Mohameds, a 20 year old who had been about to start at university before having to flee. “I miss my Mummy,” he said, as I passed the cup into his hands.

This year, as I look forward to celebrating Eid here in Morocco, for the first time with my baby son, surrounded by our family and friends, I can’t help but think of all of those people around the world who are separated from their families; those who will not be able to hand a cup of tea to a loved one or share the joy of the celebrations with those closest to them.