The NGO said that Nezzar is facing charges of war crimes and crimes against humanity committed in Algeria.

The NGO announced on Twitter that hearings for the Nezzar case will resume in September.

In addition to the NGO’s charges, Algeria’s military court of Blida also issued red notice or an international arrest warrant against the former defense minister.

In June 2018, the Swiss Federal Criminal Court (FCC)  said that “there is no doubt that [Khaled Nezzar] was aware of the acts committed under his orders” in the early 1990s.

FCC also overturned a decision of the Office of the Attorney General (OAG), which tried to dismiss the case.

Trial International also said that Nezzar was “aware of the countless crimes committed under his command.”

“In five years of investigation and after hearing dozens of witnesses without ever raising the issue of the existence of an armed conflict, the decision to shut down the case was just incomprehensible,” Pierre Bayenet, the plaintiff’s lawyer  said. The lawyer was among the attorneys who appealed against the OAG’s dismissal, according to Trial International.

The NGO maintained that  Nezzar was in charge of “troops who committed countless abuses” in Algeria during the “black decade” in 1992-2000.

Trial International filed a complaint against Nezzar in October 2011.

Police in Switzerland then put him into custody. 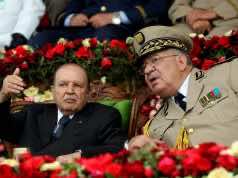 Gaid Salah: Bouteflika’s Resignation Is the Only Solution to End Algerian Crisis