The FNM is displaying the three renowned sculptures to commemorate the 20th anniversary of Mohammed VI’s coronation.

Rabat – The National Foundation of Museums (FNM) has put three sculptures on display in front of the Mohammed VI Museum of Modern and Contemporary Art. The special exhibition is in commemoration of the 20th anniversary of King Mohammed’s ascension to the throne.

The FNM worked in coordination with the Wilaya of Rabat and the City Council to designate spaces to display the three sculptures. The display of these sculptures represents an invitation for the public to discover the museum and its surrounding area. The FNM believes that free, accessible art can transform public spaces.

These artworks also serve as a preview of the first international biennial exhibition of Rabat.  This exhibition organized and financed by FNM will exhibit the artworks of 60 female artists from 30 different countries.

It will take place in different places across the capital. The Mohammed VI Museum of Modern and Contemporary Art, the Villa des Arts, the Art Gallery Espace Expressions CDG, the Oudayas Museum will all display installations as part of the exhibition. The exhibition will, taking place between September 10th and December 10th, 2019.

The most famous of the sculptures on display is the “Horse with Bridles”, created by the Colombian figurative artist and sculptor Fernando Botero. Born in 1932 in Medellin, Botero is known for his signature style, called “Boterismo.” The style usually depicts people and figures in exuberant mass and volume.

Botero’s large-scale sculptures have been displayed in the streets of a number of cities around the world, including New York, Paris, London, Moscow, Florence, Madrid, Singapore, and Tokyo.

Not far from Botero’s imposing 3 meters high and 2 tonnes heavy bronze sculpture, a triptych of polished black marble sculptures by the Moroccan artist Ikram Kabbaj is also on display. Born in 1960 in Casablanca, Kabbaj is one of the most important sculptors in the Arab world.

Advocating for the integration of sculptures in public spaces, Kabbaj has organized international conferences that brought pieces of art to the streets of El Jadida, Tangier, Fez, Essaouira, Taroudant, and Assilah. Kabbaj has also exhibited her work several times in Morocco and abroad.

The third and final sculpture on display is the “Maasai Warrior”, sculpted by the Senegalese sculptor Ousmane Sow. It portrays a warrior holding a shield and a spear. Born in 1935 in Dakar, Sow was inspired by photographs of the Nuba people of southern Sudan and began work on a series of larger-than-life sculptures of muscular Nuba wrestlers in 1984. Sow then moved on to portraying other ethnicities such as Maasai people, Zulu people, and Native Americans.

Sow’s work has been exhibited internationally and he was elected as a foreign associate member of the Académie des Beaux-Arts in Paris. The display of these sculptures comes as part of an FNM campaign, on a royal decree, to facilitate access to art for the public and make art more inclusive across the kingdom. 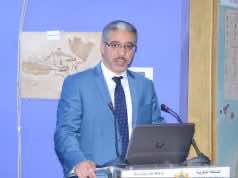 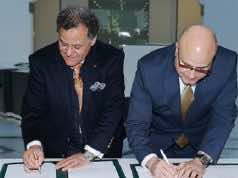 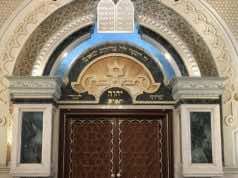