Bank Al Maghrib also released a commemorative coin, showing the value of MAD 250 on July 31 to celebrate the 20th anniversary of Throne Day. 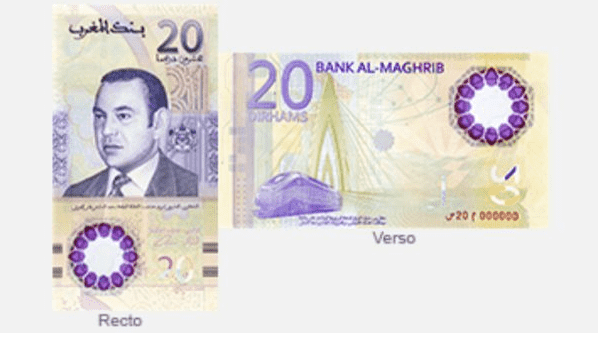 Rabat – On Wednesday, August 21, Morocco’s Bank Al Maghrib announced the release of a commemorative banknote  of MAD 20. The banknote’s release celebrates the 20th anniversary of the King Mohammed VI accession to the throne.

The central bank said that the new banknote is “characterized by a vertical design, which carries a photo of King Mohammed VI.”

The back of the notebank includes drawings of some of the major projects completed under the leadership of the King, such as the “Mohammed VI” bridge, the solar power plant Noor II in Ouarzazate, the Mohammed VI satellite, and the high speed train, Al Buraq.

The achievements, according to the statement,  represent “different aspects of a contemporary Morocco committed to taking the path of progress.”

“At least 10 robust security elements were included on both interfaces, most notably microscopic texts and anti-scanning patterns that were inserted in different parts of the paper,” the bank said. Bank Al Maghrib said that the security elements aim to protect the banknote from counterfeiting.

The bank said that it will issue a limited number of the MAD 20 commemorative banknotes in September 2019.