The company made its fleet available for the public on Wednesday, August 21. Rabat – Alsa-City Bus aims to create 1,750 direct jobs with its set of new buses, which started operations in the Rabat region on Wednesday, August 21.

The general director of Alsa-City Club, Alberto Perez, said that  the company will “create 1,750 direct jobs with the means we have set up.”

He said that the new buses generate “positive feedback from users.”

The general director of the bus company added that the buses are equipped in accordance with international technical standards for safety and comfort.

The new buses are equipped with four surveillance cameras per bus, air conditioners, and WI-FI access.

The new buses replaced those provided by the transport company, Stareo.

The contract promises a MAD 10 billion investment into the bus transport system in the region (approximately $1.2 billion) over the next 15 years. The contract includes bringing over 300 new buses to Rabat-Sale. 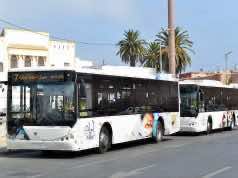