Jamila has been making traditional Moroccan couscous since the age of 14. 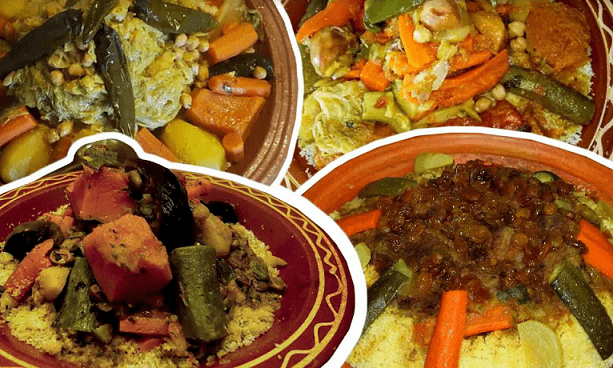 Rabat – Friday is Jamila Bakkari’s favorite day of the week. Not because it signals the upcoming weekend, but rather because she gets to spend the morning carrying out one of Morocco’s cherished traditions: preparing couscous.

Jamila has been making traditional Moroccan couscous since the age of 14.

Every Friday morning, she and her seven sisters would help their mother and grandmother cook the massive meal for their large family. Jamila began helping by washing vegetables, but she was later appointed to managing the meat.

Having learned each detail of the craft for years, she had no issues assembling the meal for the first time on her own when she got married.

In most cultures, women are often tasked with continuing the valuable traditions, crafts, and legacies that compose the foundations of a society. The Moroccan tradition of Friday couscous is no exception to this rule.

Each Friday, mothers, grandmothers, wives, sisters, and daughters around the country spend up to three hours preparing a family meal that will be devoured in less than fifteen minutes.

While some women may find the task exhausting, Jamila absolutely adores this tradition and the role she plays in its preservation. Not only is the finished product delicious, the memories she associates with preparing and eating couscous are close to her heart.

“Couscous has always given me the chance to spend time with my family,” she says.

“I grew up with seven sisters and two brothers. My brothers never helped with cooking,” she laughs. “They didn’t care.”

“My sisters and I would take turns helping our mother and grandmother cook during the week, but on Friday mornings we all had to be in the kitchen.”

“It wasn’t a chore for me,” she recalls fondly. “I loved every minute of it. We always laughed and had a great time.”

Read Also: Belgian Volunteers Invited for Couscous in Marrakech as Sign of

Several decades later, Jamila prepares the dish by herself.

She doesn’t mind these moments of solitude, though, as she enjoys looking out the large windows of her kitchen at the people bustling around the mosque across the busy street. While she waits for the ingredients to cook, she chats with her friends on WhatsApp and watches TV with her husband.

At this point in her life, Friday couscous is more important than ever. It guarantees her time with her family, as her oldest son has moved out and her youngest is usually working or busy with his friends. On Fridays, however, it’s hshuma–shameful–for anyone to be absent from the midday meal.

The sweet variant of Moroccan couscous, tfaya, is usually prepared for special occasions. In the Bakkari household, however, this delightful dish is served regularly.

The process begins with the meat, which is cooked in boiling water. The meat used for this particular dish is sheep, left over from Eid al-Adha.

While the meat is cooking, Jamila sautés onions, chickpeas, and raisins in a pan with oil. These ingredients are spiced with salt, black pepper, saffron, turmeric, ginger, cinnamon, and sugar.

When the meat is fully cooked, Jamila mixes the broth with the sautéed onions, chickpeas, and raisins to form a delicious sauce, which is then left to simmer on the stove.

Meanwhile, Jamila adds oil to the dry couscous before steaming it in the kiskas, which is a large two-part cooker.

Jamila steams the couscous three separate times to achieve the perfect fluffy consistency. In between steams, she rehydrates the couscous.

Across the street, hundreds are gathered at the mosque to pray, and the busy streets of Temara are suddenly calm.

The quiet peace is quickly shattered as prayers end and worshippers swarm the street. The vendors lining the mosque begin shouting their prices.

From the fifth-floor kitchen window, Jamila watches her husband and youngest son leave the mosque together. Her husband buys some fresh fruit for the family to eat after the meal.

When the couscous is perfectly cooked, Jamila covers it with the sauce and tops it with meat. Jamila always times her cooking perfectly so that the dish is hot and ready to serve as soon as the men return home from prayer.

Only a few minutes pass before the entire dish is cleared.

The process for cooking vegetable couscous is similar to that of tfaya. Jamila begins by boiling a whole chicken, which is seasoned with salt, black pepper, ginger, turmeric, saffron, parsley, and coriander.

When the chicken is finished, she stews vegetables in the broth until they are tender.

Jamila likes to use fresh pumpkin, carrots, cabbage, and potatoes for this couscous. 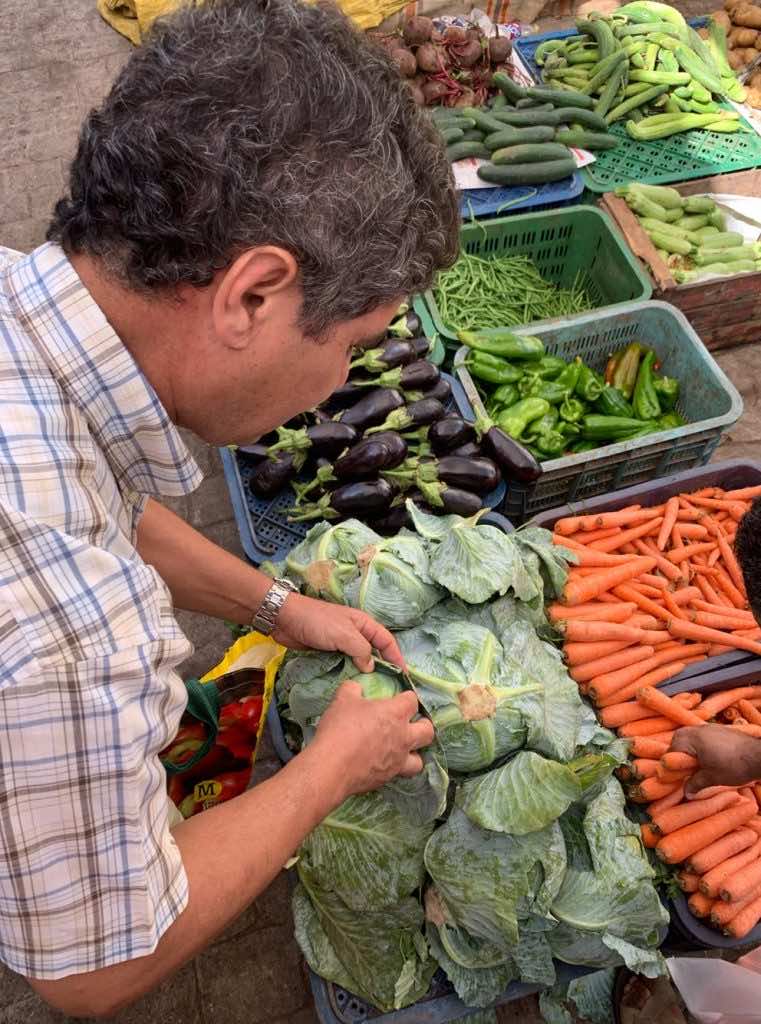 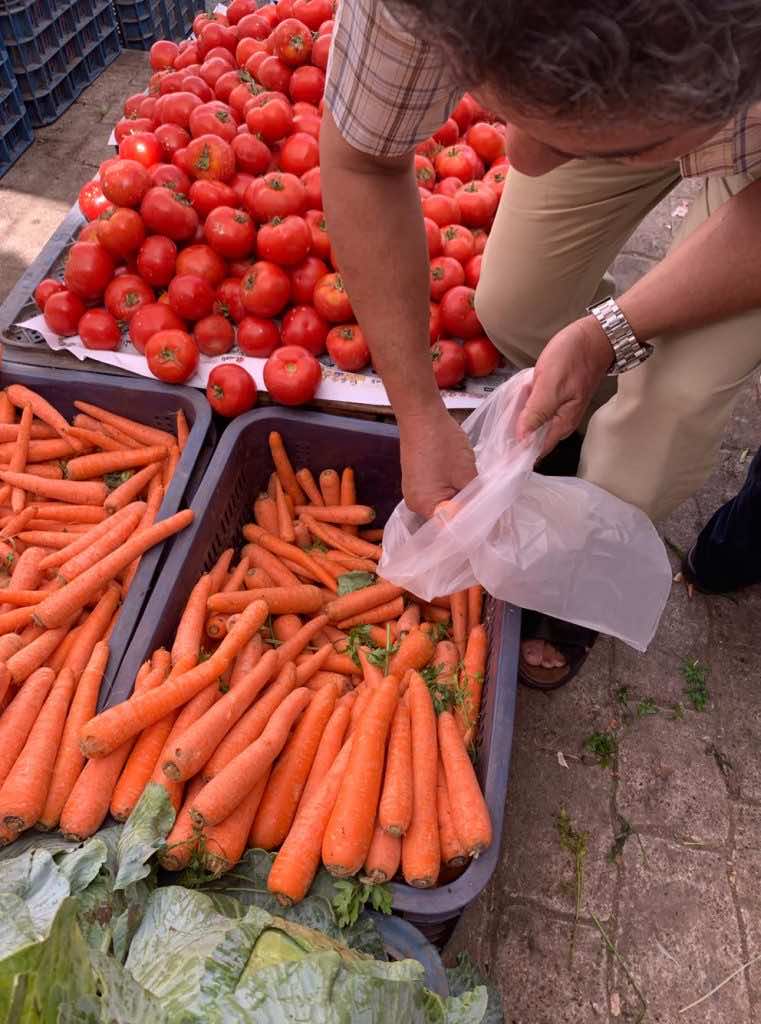 Other vegetables commonly used for this dish include turnips, sweet potatoes, beans, and zucchini or courgettes.

The dry couscous is dressed with olive oil before heading to the kiskas.

As always, Jamila steams the couscous three times. The cooked couscous is then soaked with the meat and vegetable stew and served.

Every Friday, Jamila cooks enough couscous for six people, but only five of us gather around to enjoy the meal. The remaining portion is put into a separate dish and placed on a tray with some fruit.

Jamila’s husband, Mohammed, brings the tray to a man who lives on the roof of the adjacent building.

“He’s living there alone. He doesn’t have any family to cook for him or eat with him,” Mohammed says of their neighbor. “Eating couscous at a restaurant is too expensive to do every week.”

“It’s important for us to include him, even if he’s not actually eating with us,” Jamila says. She has been cooking enough for him every Friday for two years. “Every Moroccan should be able to enjoy our traditions.”

This statement underscores exactly how valuable the tradition of Friday couscous is in Morocco.

The tradition, which has been passed down for generations, is preserved by people like Jamila and Mohammed, who remind us to value family, charity, and kindness–the Moroccan way.