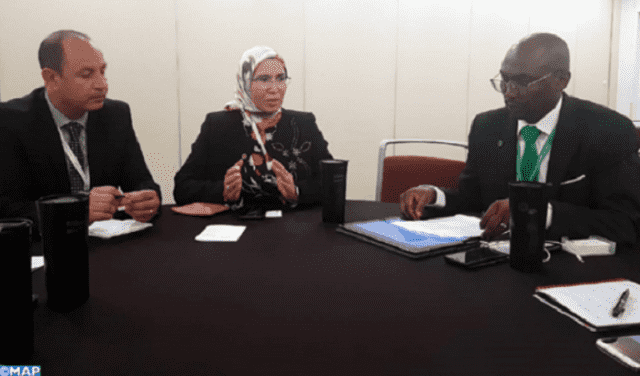 At the meeting, El Ouafi reiterated the country’s commitment to its National Sustainable Development Strategy. She also drew attention to Morocco’s goal to increase its reliance on renewable energy from its current level of 35% of all energy consumption, to an expected 52% in 2030. She discussed the plan to reduce greenhouse gas emissions, including CO2, by 42% within the next decade. Funding for this plan comes, in addition to Morocco’s own contributions, in part from the GCF.

Morocco, with its predominantly dry climate, is particularly at risk due to global climate change. The country has been experiencing increased droughts and desertification in recent years. Current forecasts showcase that this situation will likely worsen due to rising global temperatures. According to the Ministry of Energy, the average Moroccan had 2 560m3 of water available in 1960, contrasted with 730m3 today and the forecast estimate of 500m3 by 2030.

Morocco’s electricity consumption per capita has doubled from 1999 to 2015, reaching 901.13 kWh, with 61% of its production currently depending on imported fossil fuels. To remedy this situation, Morocco has been investing in solar, wind and hydraulic production facilities. In addition to running public awareness campaigns encouraging the use of private solar panels.

Currently, the GCF works in partnership with the Ministry of Energy, Mines and Sustainable Development, CDG capital, and the Agency for Agricultural Development on over six different projects. These projects are designed to help Morocco both mitigate the causes of environmental degradation and to adapt to future climate conditions. The GCF is partially funding the Saiss Water Conservation Project, the Development of Argan Orchards in Degraded Environments, in addition to Irrigation Development and Flood Management.