Following the devastating floods in Taroudant and other southern regions, Moroccans have called out authorities for the careless construction of a football pitch on a high-risk site. 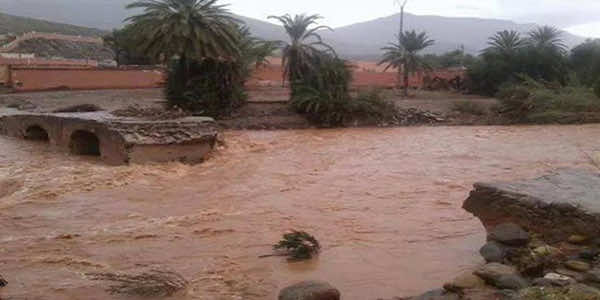 Rabat – While enjoying a football match, Tizert villagers in the Taroudant province suddenly found themselves swept away by a flash flood. Heavy rainfall hit the region on August 28 and 29. The resulting floods caused widespread human and material damage.

At the time of writing, authorities recovered the bodies of seven people while an elderly man was injured. Other victims of the flood are still missing.

Moroccans have taken to social media to express their frustration. Internet users are claiming officials and local authorities ignored warnings about the construction of the football pitch.

Villagers allegedly warned officials of the impending danger associated with the terrain allocated for the football pitch prior to its construction.

A local activist, Achnid Abderahman, posted pictures of the football field, warning the people in charge of the recurrent floods in the region.

“As you can see the football field is built on the riverbed. In the summer, floods demolish everything in their path as it is known for most mountainous areas,” he explained in his July 15 Facebook post. 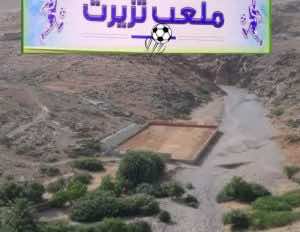 The embedded image shows that the football field was located close to the marked riverbed. For most Internet users, the field was “obviously misplaced,” especially as “mother nature often has the upper hand.”

One Facebook user sarcastically enumerated all the steps leading to the “disaster.”

“Someone proposed building a football field on the riverbed, another found the idea great, approved it and authorized the construction. After that, someone budgeted the project, and then someone else allowed the two teams to play the football match; a fifth person organized the event and provided the logistics,” said the Facebook post.

The post concluded by saying, “it is with like-minded people that you want to build the new development model…”

In response to the post, several internet users commented on the stupidity of those responsible for the project.

“As usual with the leaders of this country, they think only in the short term, they must have thought it was the only flat ground! It’s their neurons that are flat,” said one of the comments.

“They are the victims of the stupidity of adults and the mistakes of irresponsible officials,” added another Internet user.

“Building a football field on a riverbed is a matter of madness and a lack of education,” “it’s unfortunate that we still have idiots making decisions in Morocco,” added two other users.

Locals, on the other hand, expressed their dissatisfaction of the facilities of Ighrem hospital, where some of the flood victims were treated. One of them commented sarcastically: “even the hospital needs to be in a hospital,” referring to the terrible state of its facilities.

Moroccans expressing their opinions on Facebook say that the country’s biggest media companies are not giving the event enough coverage.

Another channel, 2M TV, did not even mention the floods in its late-night news program. 2M mentioned the incident in a couple of articles on its website, and the articles contain little information.

The government is yet to respond to the claims of state responsibility for the incident pending an investigation into the incident opened on August 29. Senior government officials including the prime minister have, however, tweeted their condolences.