The video has sparked backlash online, with users calling for the tourist to be prosecuted for vandalism, and calling out her lack of respect for Moroccan customs. 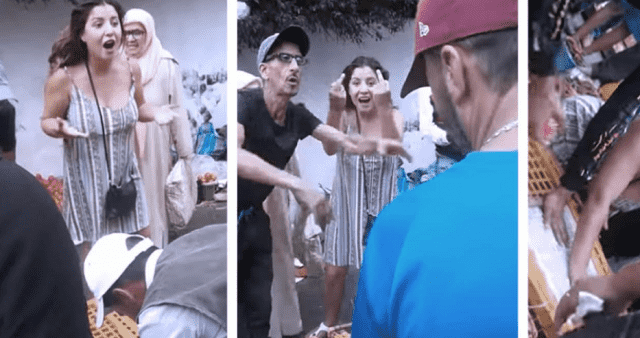 Rabat – A video of a woman with a British accent screaming at chicken vendors and committing acts of vandalism in the souk of Sidi Bouabid in Tangier has gone viral.

The footage has sparked anger over tourists visiting Morocco with the aim of imposing their own cultural and societal values on the population.

In the video, the woman can be seen aggressively screaming, at the men that they “can’t read”. Still screaming, she proceeds to swear at them and stick up her middle finger, violently berating the chicken vendor for the living conditions of the chickens.

Having already amassed a crowd of onlookers, she throws herself on the cages, attempting to break open the lid. When the chicken vendor tries to keep the lid shut, she bites his hand.

The onlookers tell the woman she is crazy, and others tells the chicken vendor to call the police. As the woman gets increasingly hysterical, another onlooker advises the vendor to carry the chickens away in order to pacify her.

However, when he does begin carrying the chicken cages away with the assistance of other men, the situation only escalates. “You don’t treat animals that way!” she yells.

She then proceeds to punch the Moroccan chicken vendor. The man responds by putting his hands in front of his face in self-defense.

She then tries to break the chicken cages open again, kicking and punching anyone who tries to intervene. The tourist can be seen directing her anger towards an elderly woman before the footage goes shakey and the video cuts off.

A police source told lesiteinfo.com that the tourist was taken to hospital in a hysterical condition, after locals informed the tourist police of the incident.

While some internet users make fun of the tourist, others point out the more worrying dynamic and draw attention to the fact that, while she believes she is promoting animal rights and informing an ‘ignorant’ population, she is displaying an arrogant, neo-colonial attitude, expecting to influence change in a culture she does not fully understand.

“Thank god she didn’t come to Morocco during the festival of sacrifice,” one user pointed out.

“I pity this poor salesman who was just trying to make a living, only to be subjected to awful name-calling and gestures! And coming from a supposedly civilized country as well,” said another.

“Does she think that in her countries chickens live in villas or something?” another chimed in.

Others commented that if she would not behave that way in her own country, she should not do it here either, describing it as an act of vandalism that should be punished with imprisonment and fines.

Another user commented “if it was a child in a cage instead she would have taken a selfie with it instead,” perhaps alluding to her having a white-savior complex, a term used for white tourists who visit countries in the global south, particularly in Africa, and try and “help” without fully understanding the dynamics at play.

While police were called to the scene of the incident, it remains to be seen whether the woman will be prosecuted for what can only be described as verbal and physical assault, as well as vandalism.

The incident is an example of ‘white privilege’ in practice, and is a common theme in the modern phenomenon of ‘voluntourism.’ In an ever more global society, where the privileged classes are able to travel at will, the global south is experiencing a resurgence of colonial powers at an individual level.

Now it is not only the governments, explicitly controlling political and financial dynamics, but the individuals who, as a result of their own privilege, see themselves as superior to the inhabitants of the countries they visit.

How Vegetarians and Vegans in Morocco are Advancing Social Understanding 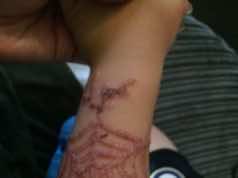