Rabat – A Moroccan flight crew reenacted on Sunday, September 1st, the first flight on route Toulouse-Rabat-Casablanca of the French aviation company Aeropostale, in commemoration of its 100th anniversary. The flight was organized by Rabat’s Flying Club (ACRR), in cooperation with the National Association of Aviation in Morocco.

The initiative, led by a four person crew, also aims to recognize the role of Morocco in developing intercontinental flights. “Intercontinental and commercial flights would have never existed and Aeropostale would have never taken off without the 1919 air agreement allowing flight over Moroccan territory,” said Hicham Meftah, the general secretary of ACRR.

The flight’s crew will participate, along with other Moroccan crews, in the air rally Toulouse-Dakar taking place on September 23 and 24. Twenty three Moroccan planes will stop over Tarfaya and Dakhla (south of Morocco), announced Ali Najab, a member of the flight’s organizing committee.

Aeropostale was a pioneering French aviation company. It was founded in Toulouse, France in 1918. It was then dissolved in 1932 and merged with a number of other aviation companies to create France’s biggest airline Air France.

Aeropostale specialized in airborne postal services, with routes between France, its protectorates, and colonies. One of Aeropostale’s most famous pilots was the French author, Antoine de Saint-Exupéry, who wrote a novel “Night Flight” describing one of his flights. 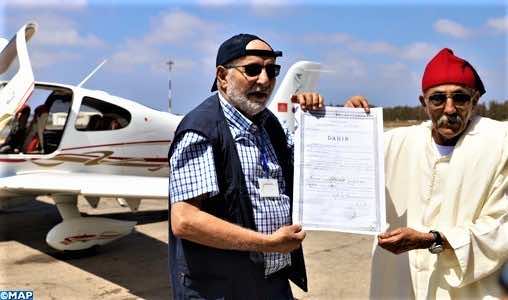 An exhibition named “The Line – A Moroccan Epic Journey Rabat 1919-2019” will take place in Morocco’s National Library (BNRM), Rabat, from September 19 to October 12, then in Dakhla in December.

The exhibition will commemorate the Toulouse-Rabat-Casablanca route, “The Line” being one of Aeropostale’s names.