“I won’t move from here until they find me a solution. They need to pay a taxi for me to get to work, and give me a document to justify my late arrival to work.” 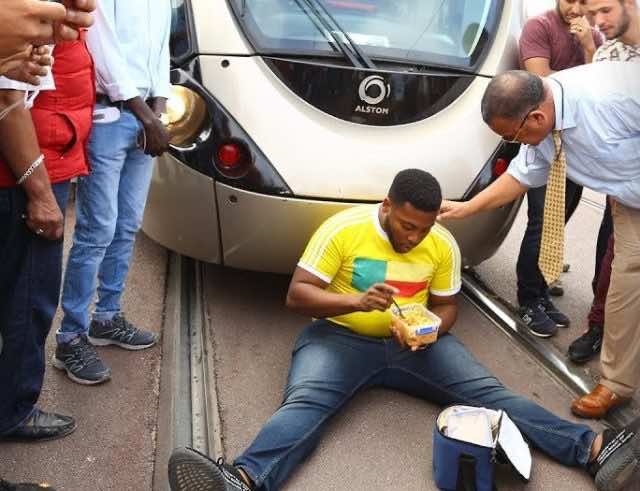 Rabat – In the recent days, videos and pictures of a sub-saharan immigrant protesting against the low-quality service provided by the tramway company of Rabat-Sale are going viral.

The immigrant, wearing a shirt with the Benin flag on it, lay down in front of a tramway wagon, saying that he would not move until his demands were met. In one of the videos, he explains the reasons behind his protest.

The immigrant then explained his personal situation. He works for a call center in Agdal and his budget is very limited.

“I came out of my place with just enough money to renew my transportation card. I don’t even have one dirham on me, not even one cent, look! I don’t have money to go to work,” he said while showing his empty wallet.

The protester also shed some light on how the situation had evolved: “We arrived to Hassan bridge and they asked us to get off the tram; because of a malfunction. Why do we have to get off because of an electricity malfunction? It’s not our business. I paid for my transportation card. I don’t have money to pay for a taxi to go to work. They need to find me a solution.”

Afterwards, the protester talked about what he saw as a racist comment from one of the bystanders. “I am complaining here and the man over there asked me ‘can you do this in your own country?’ This means that since it isn’t my country, I don’t have the right to talk, even if they step on me!” he exclaimed angrily.

The man then expressed his demands: “I won’t move from here until they find me a solution. They need to pay a taxi for me to get to work, and give me a document to justify my late arrival to work.”

Finally, the man urged everyone to defend their rights: “This happens because nobody speaks up. When this happens, everyone goes to their occupations and nobody talks about it. If everybody speaks up for their rights, this won’t continue. This needs to stop!”

Moroccans expressed their support for the protester, and encouraged all fellow citizens to do the same when their rights are not respected.

“If Moroccan citizens did acts like this one, our conditions would improve in many domains, especially trains, public administrations, and hospitals,” commented one Facebook user.

“For those who don’t know it, transportation companies are legally bound to provide alternative transportation or a refund, along with a document to prove your late arrival to work or studies,” added another Facebook user in a comment.

Tramway delays and malfunctions are not an unusual event in Rabat. Only a few days before this incident, on September 6, a tramway wagon malfunctioned near the National Library. Passengers were compelled to find other means of transportation to get to their destinations. Tramway traffic remained interrupted for more than two hours before getting back to normal.