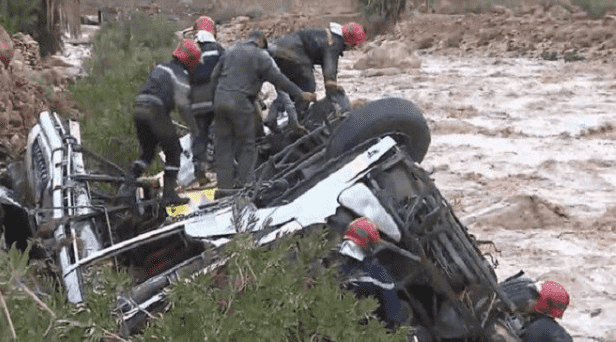 Rabat – Security services have found the body of a woman, the victim of an accident caused by floods in the Errachidia province.

On Sunday, September 8 shockwaves spread throughout Morocco when a bus overturned on a bridge in Errachidia province. Security services are still looking for possible missing people, while 18 people have been reported dead.

Security services managed to rescue 30  other people victims of the incident.

Local authorities reported that they are investigating the driver bus, who fled the scene immediately after the incident.

As floods throughout the southern provinces of Morocco continue to claim victims, authorities warned citizens to check weather forecasts to avoid similar incidents.

Equipment and transport Minister Abdelkader Amara told the press that “the National Meteorological Directorate published weather reports on a regular basis that must be taken into account and that citizens must be aware of the weather warnings issued by provincial and local officials.”

He added that weather issues “should not be treated carelessly.”

In addition to the flood in Errachidia, floods in Taroudant killed eight people. A further two people were reported dead due to floods in Khenifra, while the Imlil region,  a town 66 kilometers far from Marrakech, experienced a flood that caused massive material damage