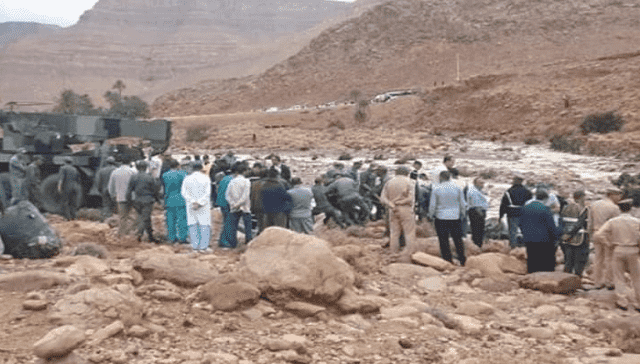 Rabat – Security services in Errachidia province recovered on Friday, September 13, the five more victims from the wreckage of the bus crash caused by heavy flooding.

Over the past two weeks, authorities have found several bodies after a bus connecting Casablanca and Rissani overturned on a bridge in the Draa Tafilalt region.

The incident was the result of floods in the region after severe rainstorms hit the province.

Search operations are ongoing to find possible missing victims. On Monday, September 8, authorities initially reported that only six people had been killed in the accident.

Search operations subsequently found several more bodies. On September 11,  authorities found the body of a woman, also the victim of the accident caused by floods in the Errachidia province.

Security services managed to rescue 30  other people victims of the incident. Moroccan television channel 2M reported today, September 13, that the 54 passengers were on the bus.

A further two people were reported dead due to floods in Khenifra, while the Imlil region,  a town 66 kilometers far from Marrakech, experienced a flood that caused massive material damage