One small charity is making a huge impact in the city of Azemmour, near Casablanca, by sterilizing the area’s household and street cats—for free. 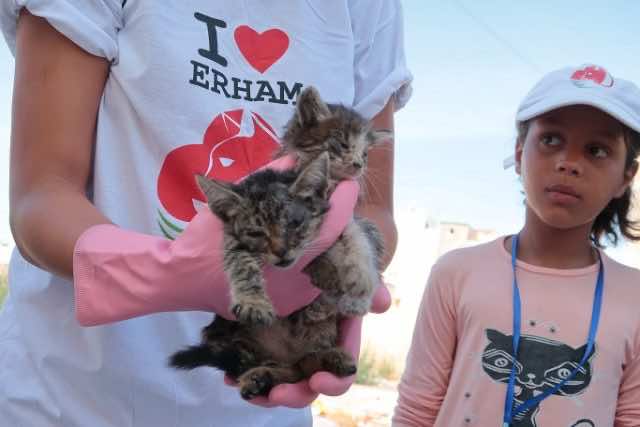 Rabat – Early morning in the coastal town of Azemmour, about an hour south of Casablanca, Anne Heslop makes her way from her house to a nearby garbage dump. Like every other day, she will begin this one by looking through piles of rubbish for newly abandoned kittens.

Azemmour, like most Moroccan cities, is overrun with strays. Many of these cats and dogs are malnourished and carry viruses—and they are all rapidly reproducing. But one charity, ERHAM, has been working tirelessly to change this.

ERHAM means “take pity” in Arabic, and this is exactly what founder Anne Heslop wants the people of Azemmour to do: take pity on the animals subjected to a life of neglect in Morocco’s streets.

Anne formally established the charity in October 2017 by hosting festival “Meow” in the town of Azemmour. The celebration of cats taught the local people how to take care of their cats and, most importantly, introduce them to the benefits of sterilization.

One of the town’s glaring issues is the constant abandonment of kittens, born to cherished household pets but dumped in a rubbish tip by owners who can’t afford to keep them.

“The people love their cats, and love that they keep their houses free of mice and rats, but they are at a loss to know what to do with the kittens that keep on coming,” Anne told Morocco World News.

“Some of these kittens will probably end up abandoned on the dump. The owners most likely believe the kittens will survive independently, but the chance of this happening without our help is really very small.”

In the spring of 2019, Azemmour faced a total disaster at the city’s garbage heap.

“I couldn’t believe it when I arrived last April and went to the dump. There were approximately 80 kittens crying for food, many of them were sick, and two were disabled,” Anne recalled.

A local resident named Fatima had been caring for the kittens of the rubbish tip for longer than she can remember. This year, however, was overwhelming.

“Fatima was doing her best to take care of them, but she was utterly distraught and clearly needed help. It was a heartbreaking scene.”

ERHAM quickly organized a clean-up and treatment day and employed workmen to set up a concrete slab with a tiled surface for feeding. Meanwhile, volunteers removed all of the kittens from the dump, cleaned them, fed them, and gave them medical treatment. ERHAM also made waterproof boxes to serve as shelters on the concrete, and the “kitten city” of Azemmour was born.

That day underscored precisely why it is so important to offer free sterilization services to Azemmour’s cat owners and educate the population about the procedure’s benefits. Most residents can’t afford to sterilize their own cats, and many suspect that spaying and neutering animals violates their religious principles. This creates a staggering population of unwanted kittens.

“Instead of just working with street cats, we carry out awareness and treatment days in different parts of Azemmour to encourage people to bring their female cats to the clinic and make use of the free service,” Anne explained.

Anne is a UK native and photojournalist. She has been visiting Morocco regularly for the past 30 years and bought her house in Azemmour in 2008. Although ERHAM is still a relatively young charity, Anne’s concern for Morocco’s cats goes a long way back.

“I remember finding flu-ridden kittens in Taghazout on one of my first visits and spending a lot of time trying to help them, but it was when I bought my house in Azemmour that it really hit me how desperate the situation was,” Anne recalled.

“Once your eyes are open to their plight, you see it everywhere.”

Overwhelmed by the dozens of kittens she found wasting away in the streets of her town, Anne “researched animal welfare and cat rescue in Morocco, hoping to find some help, but there were very few active organizations active at that time.”

The pivotal moment that inspired Anne to take matters into her own hands occurred in 2014.

“I heard a kitten’s pitiful cries coming from a deserted building and followed the cries to find it. While looking, I found two more, both with severe eye infections and both terrified.”

While a friend went to fetch Anne a box to transport the three kittens she had found, she came across another two. She went home with five sick kittens that day and ended up turning her roof terrace into a kitten hospital.

This marked the unofficial start of ERHAM.

Anne began her work by doing what she could for the town’s cats by herself, supervised by a sympathetic local vet named Abdelbaki Zryouil. While filing the paperwork to formally launch the charity, she gradually found other local cat lovers who wanted to get involved, and now ERHAM has a small team of volunteers.

Anne devotes masses of time towards promoting ERHAM while at home in the UK. She writes articles for news outlets such as Metro and the animal welfare blog Katzenworld. She is constantly reaching out to new contacts for support, organizing events, and facilitating adoptions in the UK.

“It’s incredible how much goes on behind the scenes to keep the plight of the cats in the forefront of people’s minds and to fundraise to support our activities,” Anne said. She added that gaining support and encouragement from a few key people, including Agria Pet Insurance and Britt Collins, the founder of Catfest London, has been a huge help.

“We are ready now to increase our work to have a bigger impact on the welfare of the cats in our town, but funding is a key component to enable us to do this.”

Looking to the future: sterilization is the only way forward

Anne has noticed a change in Azemmour, where the general public seems to be following ERHAM’s lead.

“They are becoming more aware of the street cats’ needs and also seem to have learnt and appreciate how important sterilization is.”

Most importantly, the locals know that they can go to ERHAM for help—this is key in an area where most people cannot afford veterinary care.

Comprehensive country-wide change, however, must be initiated on a larger scale. Although there have been unverified rumors of upcoming government-led sterilization and vaccination programs, there is still a long road ahead.

“I do think there is a shift in the Moroccan government’s attitude to animal welfare and rights,” Anne noted hopefully.

“At the moment, there are agreements being drawn up with established local animal welfare organizations and there is more awareness that the people of Morocco, supported by foreigners, no longer accept the barbaric methods of population control currently in practice,” she continued.

“We hope to soon see new laws implemented and adhered to by the local administrators to protect animals and respect their rights.”