The reductions in price aim to minimize the medical expenses of Moroccans.

Rabat – Morocco’s Ministry of Health announced yesterday, September 16, the reduction in the price of nine different medications. These reductions aim to minimize the medical expenses of Moroccans, explained the ministry in Morocco’s latest official bulletin.

The drugs with the largest price reductions include Epotin 2000 and Epotin 4000, both used in the treatment of anemia caused by kidney diseases. The first had its price reduced from MAD 2.500 to MAD 1.951, the second was discounted from MAD 4.132 to MAD 3.432.

The price changes and names of each medication can be found on the table. 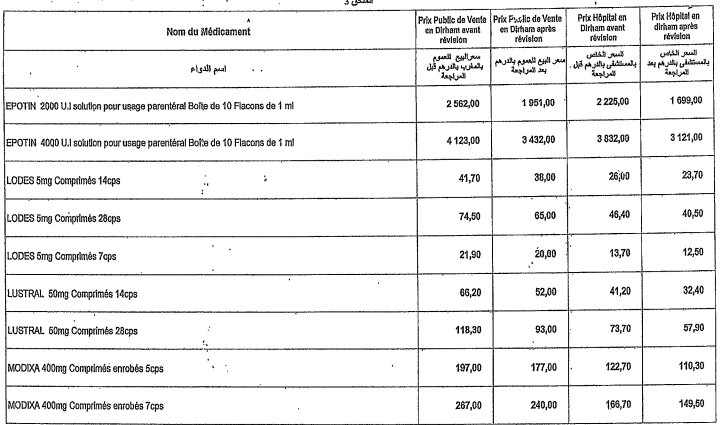 The Ministry’s decision to reduce prices comes as part of the implementation of the national drug policy, specifically decree 2.13.852, issued on December 19, 2013. The decree aims to make it more difficult for companies to sell essential medicines at extortionate prices.

Since putting this policy into effect, the ministry has been reducing the cost of drugs in groups. So far, over 3.000 pharmaceutical medicines are now more affordable for the public. The medicines chosen for reduction are mostly those used to treat chronic illnesses including cancer and mental illnesses.