The security guard also threatens a Moroccan woman, saying he will “beat her against the wall.” 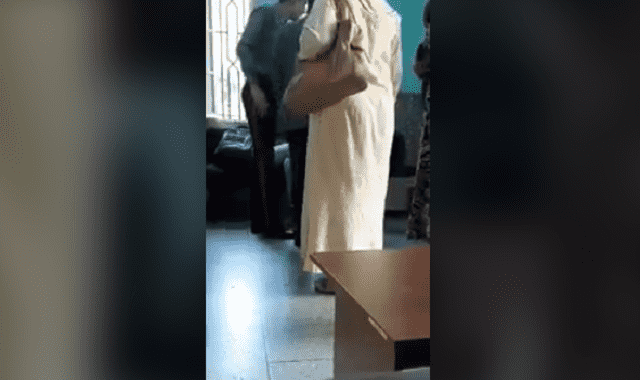 Rabat – Footage of a security agent at the Ministry of Education in Rabat is going viral. In the video, posted on September 16, the security agent insults and threatens a Moroccan citizen. He also calls himself “The King.”

The video shows the security guard screaming “You don’t have the right to enter the administration,” to a Moroccan woman. She asks “Who are you to stop me?” to which he answers loudly “I am the King!”

After the guard’s angry declaration, bystanders try to calm him down, while the woman repeats, “Listen everyone, he said he is the King.”

In the footage the woman explains that she was waiting for service at the ministry, she had been waiting since 8 a.m. However, the official who was supposed to receive her arrived at the office at 10 a.m. Legal office hours at the ministry begin at 9 a.m.

After the official finally arrived, the woman tried to access the office. The security guard stopped her by grabbing her by the arm to which the woman reacted angrily. The video footage covers the rest of the incident.

In the footage  the security guard threatens to “beat the woman against the wall,” and insults her. The situation de-escalates when other officials at the administration intervene, pulling the security guard away from the scene and trying to calm down the woman.

Moroccan Internet users have shared the video on a large scale. The footage continues to garner comments and shares. “This guard should be pursued by justice for what he said,” commented one Facebook user.

“The way officials in administrations treat normal citizens should be reviewed. Officials have to show some respect to other citizens because they get paid from the citizens tax money,” added another Facebook user.

Over 24 hours after the initial release of the video, the official secretary at the Ministry of Education, Khalid Samadi, released a statement on Facebook.

Samadi started the document by stating that the incident is unprecedented. “The ministry receives a large number of citizens everyday… No inappropriate behavior towards citizens has ever been recorded before,” says the release.

The secretary also blamed the woman for the start of this incident. “According to witnesses, the woman was agitated… She started insulting officials and employees because the document she needed took some time to be prepared,” explains the release.

However, Samadi also condemns the reaction of the security guard. “We assure [citizens] that the ministry considers the security guard’s reaction inappropriate and unacceptable, it is also incompatible with the ministry’s aims to improve its services. The guard is suspended from work, and measures will be taken to prevent incidents like this one from happening again,” announces the release.

On February 26, 2019, King Mohammed VI reminded the National Forum on Senior Civil Service that, as a part of the “new development model”, his vision of a more “efficient” civil service, that civil servants must uphold principles of integrity and fairness, and ensure accountability in Moroccan public service.

“Government agencies, at both central and local levels, are at a crossroads today. This means civil servants are expected to be actively involved in the country’s economic and social transformation process and support public policies and development projects in the country,” the King said.

The King also emphasized what the goals of such a responsive and accountable civil service should be: “The aim is to meet citizens’ growing needs, promote social justice and guarantee a dignified life for all.”