The small-scale protests took place in Cairo and other cities such as Alexandria, Al-Mahalla, Damietta, and Suez.

AFP journalists witnessed five arrests in Tahrir Square in Cairo, where a 2011 revolution led to the overthrow of President Hosni Mubarak.

The protests echoed calls for change spread on social networks. According to AFP, Mohamed Ali, an Egyptian businessman exiled in Spain, published several viral videos calling for the overthrow of Sissi and the military and accusing the president of corruption. 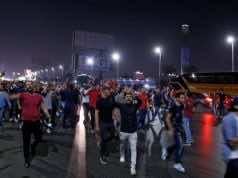