Morocco’s poor waste management system has cluttered the country’s souks, gardens, and beaches with garbage. But are Moroccans as wasteful as this visible pollution would suggest?

Rabat – My college semester living with a Moroccan host family taught me much that I would have never learned otherwise.

It taught me how to bond with people despite a language barrier, how to communicate with only facial expressions and awkward noises, how to live out of a suitcase, and above all, how to leave my comfort zone—and embrace being uncomfortable.

These are all fairly cliché, of course, as are most study abroad life-lessons.

The most important thing I learned from my host family, though, was not how to break down cultural barriers and unearth our innate similarities as humans. Rather, the most valuable lesson I gained from my host family was how profoundly different we are; not only in terms of religion or values, but in terms of environmental sustainability—as obscure as that may sound.

I had always considered myself to be environmentally conscious. But after just one day with my host family, I became acutely aware of how much trash I was producing on a daily basis as an individual—and how little they produced as an entire family unit.

So little, in fact, that they didn’t even have a regular trash can. They had a single small bucket, about the size of a garbage bin you’d find in a private restroom, for food waste and the occasional plastic wrapper or scrap of paper.

Meanwhile, I was hoarding used makeup remover wipes, tissues, cotton balls, Q-tips, plastic dental floss picks, feminine hygiene products, and the plastic cases of my single-use contact lenses in my backpack until I could throw them away at school.

This personal inconvenience catalyzed a slew of observations of what I believe to be the everyday sustainable practices and customs of Moroccans that are overshadowed by the country’s poor waste management system.

An eco-friendly way of life

Living with my host family inspired me to rethink my water usage. After my host mom told me that each member of my host family only bathes once a week, I was not comfortable showering regularly at the apartment. She made it clear that I could shower however often I needed, but I simply did not want to disproportionately use up the family’s resources.

I showered at the apartment once a week and went to the hammam, or public bath, two or three times a week. As someone who used to take long showers every day in the US, sometimes multiple times a day, this new bathing schedule made a noticeable change in my water consumption.

I did not learn to appreciate the ingenuity of the Turkish toilet until very recently, when I went to Sefrou to visit my Moroccan husband’s aunts. The western toilet at their house was broken, and I had to manually fill the basin every time I wanted to flush. I was appalled when I realized exactly how much water is needed to flush a western toilet, and how comparatively little is needed to flush a Turkish toilet.

The souk is another site of Moroccan sustainability.

Read Also: The World Must Unite to Adapt to Climate Change

Although plastic has unfortunately become more common among vendors, most shoppers seem to prefer their large and sturdy reusable bags. Shopping in the souk also means buying fresh and unpackaged fruits, vegetables, and meats. Even grains and spices are not standarly packaged.

Souk shopping, while not completely environmentally friendly, ultimately reduces the need for plastic bags and food packaging that would end up in landfills or at local dumping grounds.

The souk is also home to an unofficial recycling system. Plastic water bottles and jugs are repurposed to store and sell household cleaners, soap, oil, juice, honey, milk, and sauces. Discarded papers end up in hanouts where they are used to package small servings of nuts, dried fruits, candies, and spices.

Unwanted kitchen appliances, clothes, shoes, accessories, home decor, and electronics are collected and resold in Moroccan markets. You can find almost anything in the souk, and many of these goods are passed from owner to owner until they are no longer usable.

These systems are in place all over Morocco. No matter how small scale they may be, they make an impact and deserve to be spotlighted.

While many Moroccans unknowingly engage in recycling and other environmentally-friendly practices, the country’s official waste management system leaves much to be desired.

This presents a constant burden to locals, and it’s also unsurprisingly one of the first things Western tourists notice upon arriving in the country.

“Papers, plastic, dead rats and pieces of dead animals such as chicken heads, flies everywhere, feces (both human and animal), and trash, lots of trash, I mean plastic bags filled with trash just sitting in the middle of the streets,” she writes of the sights to behold in Marrakech and Chefchaouen.

“On the road you will see trash everywhere, even in the desert and near beautiful waterfalls, to my disappointment,” she says of the Moroccan countryside.

“Can you blame it on the lack of education of the locals because Morocco is a poor country? Probably yes, but it’s hard to understand that the same locals that rely on tourism so much, are so careless with the environment. It’s simply sad.”

While the same observations can be made of great cities in the West (looking at you, NYC), Milliane makes a logical but shallow argument.

Of course many Moroccans are careless with their waste, and it’s easy to blame this behavior on poverty and ignorance. But when you no longer have the perspective of an outsider, things become abundantly clear.

It’s simple, actually. While it’s true that the general Moroccan public is not educated about proper waste management, trash piles up in public spaces because there are very few ways to appropriately dispose of garbage.

You can scold a Moroccan child for mindlessly dropping his candy wrapper on the ground, but you’d be hard-pressed to find a suitable public garbage bin where he can properly dispose of his trash.

I will be the first to admit that I once judged my Moroccan neighbors for polluting the lush gardens of my apartment complex just outside of Rabat. But I quickly realized that comparing the sanitary standards of my small American hometown to those of my new urban dwelling was unproductive.

Picture a typical suburban American neighborhood. It’s trash night, and each household has put their two 96-gallon bins—one for recycling, one for the landfill—at the curb.

By 9AM the following morning, the bins will be empty, their contents whisked away to the proper sorting and disposal facilities; or, more likely, shipped off to the developing world to become someone else’s problem. Out of sight, out of mind.

Single-household recycling and garbage bins in the US state of Pennsylvania. These are emptied once a week by a private waste disposal company.

Now imagine an old Moroccan medina. Have you ever seen two 96-gallon garbage bins perched beside any of those gorgeous residential doors, waiting to be emptied to make room for next week’s waste?

What about outside the medinas, in the newer neighborhoods composed primarily of apartment buildings? Does each household have those 96-gallon garbage bins?

Well, of course not! They live in apartments! Surely each complex has a communal dumpster!

Apartment complexes do not have their own dumpsters, but most neighborhoods do. However, these dumpsters are pitiful, to say the least. They’re small, constantly overflowing, foul-smelling, and horrible to look at.

The worst thing about these dumpsters is that they are often inaccessible to most residents of any given neighborhood, especially in lower-income areas. Usually you can only find them every few blocks, and sometimes not at all.

Who wants to go on a ten minute walk just to take the trash out? Especially when the dumpster is probably full and you’ll just end up emptying your trash onto the ground next to it? Not me.

A more practical option for some, it seems, is to dump household waste wherever there’s space, even if this means polluting the area around one’s own residence. Some might assume that the trash will be collected eventually. This is true in some places, like medinas and busy neighborhoods. Most of the time, though, the garbage is left to fester.

According to the World Bank’s latest analysis of trends in solid waste management, the Middle East and North Africa (MENA), as a region, produces the least of the world’s waste at just 6%. More than half of this waste is organic matter.

However, the problem with Morocco, like most lower-income countries, lies in its dumping methods.

Unfortunately, this is why Morocco’s everyday sustainability goes largely unnoticed. The public trash problem is only exacerbated by careless individual behavior, which earns Morocco a pretty nasty reputation.

Morocco: Greener than meets the eye

I’m well aware that some (or perhaps many) of the aforementioned eco-friendly practices are simply features of poverty and economic underdevelopment. I’m also aware that the lifestyle I’ve described doesn’t apply to every single Moroccan.

However, since moving to Morocco, I’ve noticed a drastic change in my own water, gas, and electricity consumption; waste production; and use of plastic. This has not transpired through conscious choice but rather by adjusting to a stark change in lifestyle.

I now rely entirely on walking or public transportation to get around.

I shower once every other day rather than twice a day, and I only turn on the water heater when completely necessary.

I’m more careful about turning lights off and unplugging electronics.

I hang worn clothes in the sun to eliminate odor and bacteria rather than washing them after each use, and I dry my laundry in the window instead of using a machine.

I no longer drink beverages from paper or plastic cups. Instead, I enjoy coffee and juice in glasses even when I’m on the go.

Most of my food comes fresh from the souk, where I’ve also bought a used iPhone, clothes, home decor, and kitchen appliances.

I now have a four-gallon trash can in my kitchen, which my husband empties two or three times a week. My bathroom trash can is half the size, and gets emptied once every two weeks.

This means that my husband and I produce less than 15 gallons of household waste—most of it organic—every week.

At my college apartment in upstate New York, my roommate and I produced more than 15 gallons of waste—most of it paper or plastic—every two days.

My new Moroccan lifestyle is certainly not perfectly green, but it is a vast improvement from my wasteful habits at college and at my home in the Pennsylvanian suburbs.

However, Moroccans still have a long way to go in terms of individual sustainability.

Despite this, I don’t believe that the country’s littered streets and waterways accurately reflect the everyday sustainability that I’ve seen and experienced while living here.

There is more to Morocco’s trash problem than meets the eye. We should reserve our judgement for the structural flaws in the country’s waste management, learn to appreciate the small-scale sustainability, and support the initiatives that will create a cleaner Morocco. 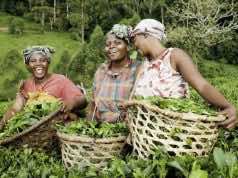 Morocco Sentences Teacher to 6 Months in Prison for Child Abuse