Rabat’s Court of Appeal decided on September 25 to postpone the trial of the 24 defendants in the Imlil murder case.

By
Kawtar Ennaji
-
Kawtar Ennaji is a journalist and translator at Morocco World News, MA holder from King Fahd School of Translation
Sep 26, 2019
Spread the love

Rabat – Rabat Court of Appeal in Sale decided on Wednesday, September 25, postponed the trial of the 24 suspects involved in the murder of the two Scandinavian tourists in Imlil (El Haouz province).

The defendants will appear in court again on October 9.

The Court decided to postpone the trial due to the lack of an interpreter. The court emphasized the necessity of ensuring the conditions of a fair trial and allowing each of the accused the right to a fair defense.

The three main suspects received the death sentence, while the fourth defendant was sentenced to life imprisonment.

The defendants are accused of “forming a gang to commit terror crimes and intentionally assaulting the life of persons premeditatedly.”

They are also accused of possession of weapons, and “attempt to manufacture explosives with the intention to cause serious public harm, terrorism, and violence.”

The mastermind behind the Imlil murder case, Abdessamad El Joud, admitted on September 19 that the cell plotted the murder of the two Scandinavian victims.

Both victims were beheaded, authorities confirmed.

“They [the victims] are only two, we are millions,” said the defendant, referring to Muslims worldwide who he sees as persecuted.

The defendant’s defense team is calling on the court to give lighter sentences, while the victims of the families are determined that the accused should receive the death penalty.

The victims’ families received sympathy from Moroccan citizens, who protested the murder in front of Norwegian and Danish embassies last year to show solidarity. 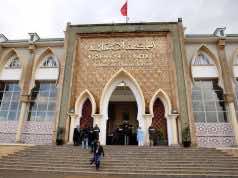