“The Other Americans,” tells the story of an Arab American Muslim family struggling with identity, belonging, love, and justice in today’s United States.

Rabat – The National Book Foundation, a non-profit organization in the US, has selected the Moroccan author Laila Lalami’s latest book for the shortlist of the 2019 National Book Awards. The foundation published the award shortlist yesterday, October 8.

Lalami’s nominated book “The Other Americans,” tells the story of an Arab American Muslim family struggling with identity, belonging, love, and justice in today’s United States.

The foundation shortlisted the book for its fiction category award. Other award categories include young people’s literature, translated literature, poetry, and nonfiction.

Lalami expressed her happiness for being part of the award’s shortlist.

Utterly thrilled and grateful to see The Other Americans on this list!!! I’m at UCLA Medical, waiting to have my knee looked at again, and the huge smile on my face is confusing everyone here. ??? ?? ???? https://t.co/zYfh20Qtw2

“The Other Americans” is also competing to receive the $50,000 Kirkus Prize, one of the highest awards that an author can receive in the US.

Lalami was born in Rabat and received her education in Morocco, the UK, and the US. Currently, she teaches creative writing at the University of California at Riverside.

Another of her other highly-praised works, titled, “The Moor’s Account,” also tells the story of a Moroccan in America. The book is a historical fiction, set in 1527. 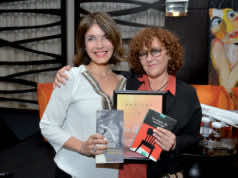