The PJD, the ruling political party, dominated the government seats as part of the cabinet reshuffle.

Rabat – A member of the Socialist Union of Popular Forces (USFP) Mohamed Benabdelkader has replaced former Minister of Justice Mohamed Aujjar from the National Rally of Independents (RNI) as part of the government reshuffle on Wednesday, October 9.

The reshuffle comes following an urgent call from King Mohammed VI to give fresh momentum to Morocco’s public services administrations with high-level competencies and elites.

Benabdelkader replaced Aujjar, who served as a minister of Justice since April 2017.

Born in April 1961, Benabdelkader is from the city of Tetouan in northern Morocco.

Benabdelkader holds two Masters in communication sciences from the Faculty of literature in Rabat and another Masters in Advanced Diplomatic Studies from the University of Legal Sciences in Rabat.

The official also holds a diplomat of Specialization in the International Business Cycle on the practice of international negotiation from the National School of Administration in Paris (ENA).

Benabdelkader also served as a senior inspector at the Ministry of National Education.

The official served in other positions in the government, including the position of chief of staff at the Ministry of Regional Planning, Water and environment from 2002-2007.

Benabdlekeder also worked with the Ministry of Education, serving charge d’affaires for studies from 2008 to 2009.

In 2009, he was appointed as the head of the Cooperation and Promotion of Private Education at the Ministry of National Education.

In 2017, King Mohammed VI appointed Abdelkader as the Minister delegate to the Head of Government in charge of administration and Public Service Reform.

The new minister for Justice also served as deputy secretary-general of the Moroccan Commission for Education Science and Culture and Member of the Executive Board of Islamic Educational, Scientific, and Cultural Organization (ISESCO). 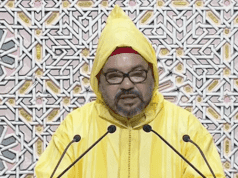