The activists are calling on the government to recognize the rights of handicapped people and follow through with reforms to improve the quality of life for Morocco’s citizens with disabilities.

Rabat – Moroccan organizations and activists fighting for the rights of people with disabilities took to the streets of Rabat today, October 12.

The demonstrations began this morning at 10 am in front of Bab El Had in the medina of Rabat.

Today’s protests follow the anniversary of the tragic death of Saber El Haloui.

Read also: Morocco and the Rights of People with Disabilities

El Haloui, a visually impaired activist, fell from the rooftop of the Ministry of Families headquarters in Rabat during a sit-in on October 7, 2018.

The groups are challenging the Moroccan government’s “fake promises” to promote the rights of people with disabilities, according to a statement given to MWN on Tuesday, October 8 by activist Hafid El Hanouni.

“We want the government to activate their plans to promote handicapped people’s rights. They keep giving us fake promises to improve Morocco’s image on the international level, but in reality, disabled people in Morocco are still living in a very difficult situation.” 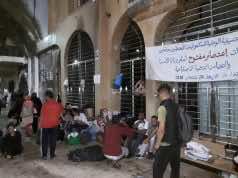 Disability Rights Activists to Protest on the Streets of Rabat