Burkina Faso, Yemen, Gabon, El Salvador, along several with other countries all showed support for Morocco’s territorial integrity during a UN meeting 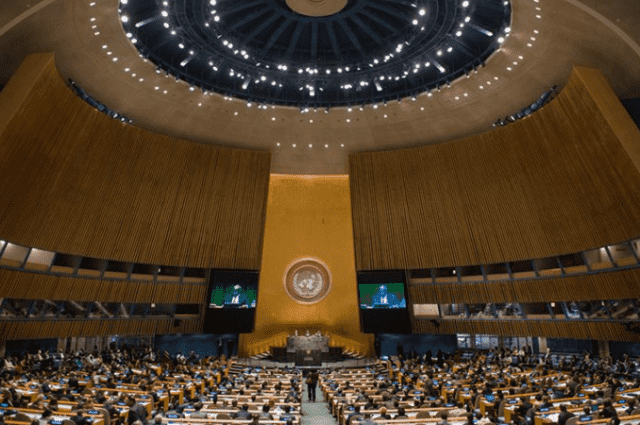 Rabat – Morocco’s position on Western Sahara received a boost during the 4th Committee of the United Nations on Tuesday, October 16, with a group of countries expressing their support for Morocco’s territorial integrity.

El Salvador, one of the latest states to withdraw recognition of Polisario’s self-proclaimed SADR, reiterated, on October 16, its support for the UN-led political process. The process aims to achieve a “realistic, pragmatic and sustainable political solution based on compromise” for the Western Sahara conflict.

Speaking to the committee, Permanent Representative to the UN Egriselda Lopez said that her country encourages efforts to find a “peaceful, fair, and lasting solution.”

Burkina Faso, one of Morocco’s African allies expressed its full support for Morocco’s territorial integrity to the committee. The Burkinabe representative emphasized that Morocco’s autonomy initiative represents a “compromise solution” to the conflict.

Morocco submitted the Autonomy Plan to the UN in 2007 as a proposal to end the conflict over Western Sahara.

The “serious and credible” initiative, as called by several countries in the international community, plans to offer Sahrawis the legitimacy and the right to govern their own affairs through the devolved government. Residents would also benefit from Morocco’s southern provinces’ resources in Western Sahara.

For Burkina Faso, the Moroccan Autonomy Plan “takes into account the specificities of the region and meets the international standards in the devolution of powers to local populations,” permanent representative of Burkina Faso to the UN Eric Y. Tiare said on Tuesday.

Tiare also expressed satisfaction with the development projects initiated by Morocco in its southern provinces  “in favor of the Sahara populations.”

The diplomat echoed the concerns of the UN Secretary-General, Antonio Guterres,  who warned against the situation of Sahrawis in Tindouf camps in his annual report.

In his recent report on the situation in Western Sahara, the UN chief said that Sahrawis the Tindouf camps are suffering from malnutrition and diseases. Anemia and other diseases are prevalent among children, and pregnant women.

Tiare also expressed “concern over the situation of populations in the Tindouf camps, which are recommended to be registered in accordance with international humanitarian law, the UNHCR mandate, the recommendations of the UN Secretary-General, and Security Council resolutions since 2011.”

Gabon’s deputy permanent representative to the UN also welcomed Morocco’s autonomy initiative during the meeting. For Gabon, the Autonomy Plan would “not only to put an end to the current impasse but can also lead to reach a negotiated political solution.”

The Autonomy Plan, according to the representative from Gabon, is in line with international law as it takes into account the regional specificities and the need to involve local populations in the development of the region.

“While the Sahel region is facing security challenges, we need to work towards a rapid political settlement of this regional dispute that undermines cooperation among the countries in the region,” the diplomat said.

El Salvador, Gabon, and Burkina Faso are among a long list of countries to reiterate support for Morocco’s position during the 4th UN Committee. Other countries supporting Morocco’s territorial integrity in the symposium include Yemen, Saudi Arabia, UAE, Qatar, Burundi, and Guinea.