The ‘protesters’ were in contact with Polisario Front military officials before marching on El Guerguerat, causing speculation that the separatist group is behind the move. 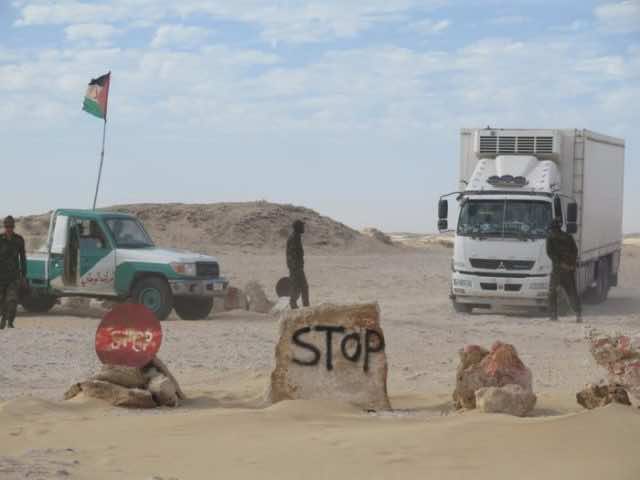 Rabat – The border crossing between Morocco and Mauritania at El Guerguerat remains impassable for exporters since Thursday, October 17. Tents and blockades set up by a group of pro-Polisario Sahrawis are currently blocking the passage of Moroccan merchandise to sub-Saharan Africa.

According to Al Ahdath Al Maghribia, the protesters are denouncing what they view as ‘excessive’ customs fees.

The group, presumed to be operating at the behest of the Polisario, claim that the Moroccan customs officials broke their promise to hold a meeting with them in Dakhla to find a solution to their problems, the Moroccan newspaper reported.

Meanwhile, Pro-Polisario media Futuro Sahara claimed that one of the blockade’s organizers reached out to the Polisario Front’ military for help.

According to the same source,  the Polisario Front leadership has not officially approved the blockade. The news outlet emphasized that the group is calling for the release of Sahrawis detainees from Gdim Izik prison and an end to the looting of natural resources.

The Polisario Front has claimed, on a number of occasions, that Morocco is looting Western Sahara’s natural resources.

In March 2018, the leader of the Polisario Front, Ibrahim Ghali, addressed a letter to the United Nations Secretary-General, Antonio Guterres, calling on him to put pressure on the European Union to suspend agreements signed with Morocco, including fisheries agreements.

“I urge you to call on the European Union and its member states to abandon their ongoing negotiations on trade and fisheries agreements with the Kingdom of Morocco in case [those agreements] include Western Sahara,” said the separatist leader.

Several countries along with international business experts, however, continue to support Morocco’s development projects in the region.

Last year, Philippe-Edern Klein, chairman of the French Chamber of Commerce and Industry in Morocco (CFCIM) extolled the rapid transformation of the Laayoune-Sakia El Hamra region in southern Morocco. The Frenchman went so far as to call the region an “ideal hub” for business and investment ventures in Africa.

Morocco has also laid the ground for massive development projects in the region with a budget of more than $7 billion.

In September,  the Government Council adopted Decree 2.19.737 to establish a committee to oversee the construction of the Dakhla Atlantic port.

Morocco pledged a budget of MAD 10 billion for the project. The north African country set up development plans to enhance the investment potential of the region.  The development projects are in line with King Mohammed VI’s vision to enable the local population to benefit from the region’s assets and resources.

In a speech on the 39th anniversary of Morocco’s Green March in 2014, King Mohammed VI said,  “ Since we recovered the Sahara, for every single dirham of revenue from the Sahara, the state invests 7 dirhams there, as part of the solidarity between the regions and between the sons and daughters of the region.”

In its reports on the situation of Western Sahara, the United Nations has mentioned Morocco’s considerable investments in the region.

Earlier this month, the UN’s Guterres published his latest report, in which he underscored that Morocco’s investment in the region, particularly in Laayoune continues.

In paragraph 16 of the report, the UNSG said that “Morocco maintains that such investments directly benefit the people of Western Sahara and are implemented  in consultation with them.”

In the meantime, however, pro-Polisario organizations have repeatedly spoken in support of the separatist front’s campaign to mobilize the international community against Morocco’s sovereignty over the region.

The El Guerguerat border crossing is a key route for Moroccan fruit and vegetable producers exporting to sub-Saharan Africa. The continued protests are already having a negative impact.

According to Al Massae newspaper, the Association of Citrus Conditioners of Morocco (ASCAM) issued a statement saying that disruptions will seriously impact farmers and packing plants. The statement adds that the sub-Saharan markets will not receive any produce.

ASCAM sounded the alarm by calling on the relevant authorities to intervene to restore order to the border crossing.

The decaying situation at the Morocco-Mauritania border is under the watch of the UN peacekeeping force in the region, known as Minurso. No action has been taken to date.

In his annual report to the Security Council, Guterres recalled that the Guerguerat crossing border was already a source of tension.

Guterres called on Minurso to closely monitor the situation and allow UN military observers to conduct daily patrols in the area.

“As I have detailed in this report, I am concerned about the recent incidents in El Guerguerat. The increasing commercial traffic across the buffer strip and the growing civilian activities to impede it are creating tensions in that sensitive area,” said Guterres in paragraph 83 of his report.

He specified that “regular civil and commercial traffic not to be obstructed” and calls for “both sides to refrain from any deliberate actions at Guerguerat, or anywhere else in the buffer strip.”