Rabat –  The Moroccan Court of Appeal in Casablanca has increased the sentence of Moroccan journalist Taoufik Bouachrine from 12 years to 15 years in prison. The judge gave his final verdict on the appeal request late on Friday, October 25.

In November 2018, the court handed Bouachrine a sentence of 12 years in prison. Police arrested him in February 2018 on charges of human trafficking, rape, and sexual assault against several female journalists working at his newspaper.

In addition to increasing his sentence, the court also ruled that the financial compensation he must pay to the victims should be increased.

The court ordered Bouachrine to pay compensation in the amount  MAD 800,000 to one of his “victims.”

As part of the arrest operation  in February, Moroccan police allegedly seized 50 tapes depicting sexual acts as evidence of the alleged crimes attributed to Bouachrine.

Boucharine has denied all charges against him, suggesting that his arrest was politically motivated. 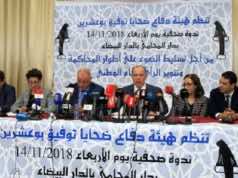