By
Susanna Spurgeon
-
Susanna is a former editor at Morocco World News.
Oct 28, 2019
Spread the love

Rabat – Readers have been criticizing the Washington Post for a headline describing the leader of ISIS, Abubakr Al Baghdadi, as an “austere religious scholar.”

The headline was part of an article on Sunday, October 27, about President Donald Trump’s announcement that Al Baghdadi died in a US special forces operation.

Readers found the “religious leader” description inappropriate. The newspaper quickly responded by changing its headline and recanting the previous one. Kristine Coratti Kelly, the Post’s vice president of communications, tweeted that the headline “never should have read that way.”

Regarding our al-Baghdadi obituary, the headline should never have read that way and we changed it quickly.

“Religious scholar” was the Post’s second version of its headline. The original headline called Al Baghdadi the “terrorist-in-chief.” The headline later described the ISIS caliph as an “extremist leader.”

Twitter users had some fun with the faux pas, writing their own inventive obituaries for infamous dictators and killers under the hashtag #WaPoDeathNotices.

“Pol Pot, national leader and one of history’s most effective opponents of urban overcrowding, dies at 72,” tweeted one user in reference to the Cambodian dictator who left over 1 million dead.

One Twitter user even wrote an obituary for the devil: “Satan, unorthodox faith leader known for pushing back against famous wine maker Jesus, dies at 14 billion.”

Among the Post’s critics was Secretary of State Mike Pompeo, who said the coverage was “appalling and sick.” President Trump’s son, Eric Trump, called the newspaper “a disgrace.”

The @washingtonpost is a disgrace. Refers to Baghdadi as a:

“Acquaintances would remember him as a shy, nearsighted youth who liked soccer but preferred to spend his free time at the local mosque” @JeffBezos pic.twitter.com/MW1Ikfl8eZ

Al Baghdadi died in Syria when he set off a suicide bomb during a raid by US special forces early Sunday morning, October 27.

ISIS Names New Leader, Warns ‘We Are in the Center of Africa’ 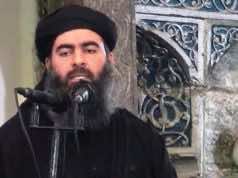