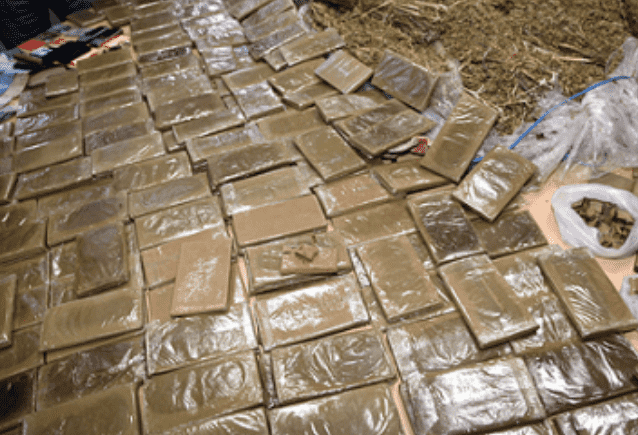 Rabat – Moroccan policemen and customs at the  Guerguerat crossing point, south of the city of Dakhla have thwarted a drug trafficking attempt.

The smugglers were attempting to traffick 936 kilograms of cannabis resin concealed in an international transport truck.

A statement from the General Directorate of National Security (DGSN)  said that police arrested the driver and his assistant, both Moroccan nationals on Monday, October 28.

The security services discovered concealed drugs during a search operation through an x-ray. Police also opened an invest The truck was on its way to an African country, preliminary investigation finds.

Police are continuing the investigation to determine the circumstances of the case and to arrest possible accomplices involved in the foiled attempt.

The operation is part of Morocco’s efforts to abort any drug trafficking attempt across Morocco and its borders.

The latest operation was conducted on October 14 when police thwarted an attempt to smuggle five tons and 996 kilograms of cannabis resin in the region.

Back in April, Moroccan police, in coordination with customs officers in Guerguerat at the Mauritanian border, seized 11 tons and 940 kilograms of cannabis on a truck bound for “an African country.”

Morocco is intensifying its efforts against drug trafficking network. In September,  the national police announced that security services seized 112 tons and 138 kilograms of cannabis and its derivatives from January 1 to September 15.

Moroccan customs also shared statistics on drug seizures during the month of October.

Customs announced that its services seized a total of 8,342 kilograms of cannabis resin the portS of Casablanca and Tangier Med since October 11.