While Morocco is a leader in regional and global counterterrorism, the country still faces threats from independent, ISIS-affiliated terrorist cells.

Rabat – The US State Department’s 2018 Country Report on Terrorism for Morocco lauded the Kingdom’s efficient handling of terrorist threats. The report praised the excellent and long-standing counterterrorism cooperation between the US and Morocco.

The US Department of State began issuing the Country Reports on Terrorism in 2017. The yearly reports examine terrorism trends and counterterrorism strategies in a given country from the year prior.

According to the annual reports, Morocco’s counterterrorism efforts effectively mitigated risks of terrorism in 2016, 2017, and 2018.

The three reports each noted that Morocco continues to face terrorist threats, primarily from small, independent violent extremist cells. The majority of these cells are affiliated with, or inspired by, ISIS.

Morocco: A global leader in counterterrorism

In December 2018, Morocco recorded its first terrorist attack since 2011 when two Scandinavian tourists were murdered by ISIS-inspired terrorists in the high Atlas Mountains. The report did not comment any further on the incident, but went on to describe Morocco’s unwavering commitment to global counterterrorism initiatives.

Morocco is an active participant in the Global Coalition to Defeat ISIS. Morocco is also a member of the GCTF and is currently the co-chair of the GCTF with the Netherlands.

Regionally, Morocco is a member of the African Union Peace and Security Council and an active member of the Trans-Sahara Counterterrorism Partnership (TSCTP). In June 2018, Morocco hosted a Political Directors Meeting of the Global Coalition to Defeat ISIS with a regional focus on Africa.

At the national level, Morocco has proven itself to be well-equipped in handling threats on the ground in 2018.

Border security remained a top priority for Moroccan authorities in 2018. Morocco tightened its control over all points of entry to detect and deter individuals attempting to transit illegally, and to interdict illicit traffickers.

In May of last year, King Mohammed VI inaugurated the Institute for Specialized Training to strengthen the kingdom’s intelligence and counter-terrorism related operations.

Morocco completed a draft law last year to stop the illicit trade and transfer of goods that could be used to create weapons of mass destruction (WMDs) or to support the development of a WMD program.

The 2018 Country Report on Terrorism acknowledged the strides made by Morocco’s Central Bureau of Judicial Investigation (BCIJ) in combatting domestic terrorism last year. The report highlighted the dismantling of various ISIS-affiliated terrorist cells that had been planning attacks in Morocco.

Comparatively, in 2017, Moroccan law enforcement arrested 186 individuals and broke up nine cells in relation to terrorism. In 2016, Moroccan security forces dismantled 18 terrorist cells and arrested 161 suspected terrorists. The lower rates of arrest for 2018 indicate Morocco’s success in combatting the main sources of terrorism in the country.

The US Department of State cited Morocco as a major non-NATO ally of the US and praised Morocco’s participation in multilateral regional training exercises.

For the third year in a row, the US has continued to recognize Morocco as a leader in combatting terrorism in Africa and Europe, as well as on a global scale. 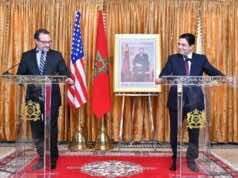