Moroccan cooks use eggplants in a wide variety of dishes, from zaaluk salad to fried eggplant. 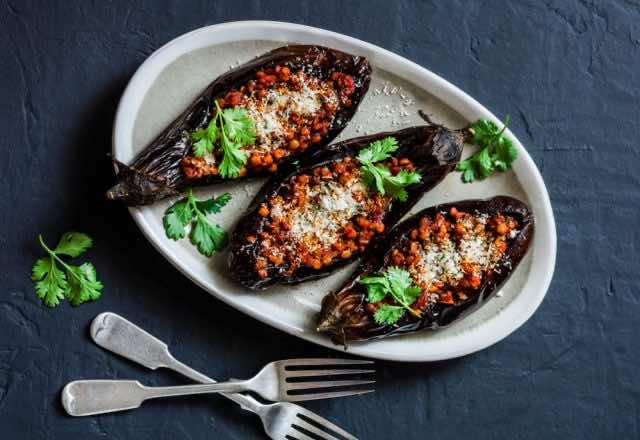 Rabat – Stuffed eggplant is one of the most popular appetizers in Morocco, it can also be served as a side dish. Restaurant menus and household meal plans often boast a variant of the recipe.

While some Moroccan cooks choose to stuff the eggplant with vegetarian options such as tomato sauce and grated cheese, others prefer to add ground beef.

I’m going to share with you my own take on stuffed aubergine. In this recipe, I will show you how to stuff the eggplant with chermoula sauce, usually used for stuffing fish. I find that the chermoula complements the distinctive flavor of the eggplant and makes for a special, unique starter.

juice from half a lemon

Make 4 cuts on the eggplants lengthwise, but keep them attached at the base.

Take the eggplants and fill them with chermoula and put them aside.

Now, ¼ cup of water and 2 tablespoon olive oil in a pressure cooker.

Place the stuffed eggplants into the cooker and cover it.

Put the pressure cooker on a low heat and cook for 15 minutes.

Uncover the cooker, remove the eggplants, and place them on a plate.

Drizzle some sauce on the top and serve them hot as an appetizer.