Morocco’s Atlas Lions, for all the post-CAN talk of reconstruction, confidence-building, and preparation for continental glory, do not appear to have developed the mentality they need to have to turn the tide. 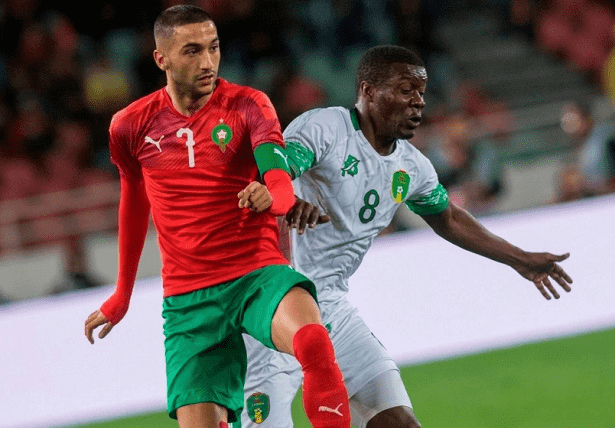 Rabat – One would have expected an emphatic victory of Morocco against a team of Mauritania’s caliber.

The Atlas Lions have the class and the numbers that every African team dreams of, while Mauritania is still struggling to have a functional, imposing group of players. But, if anything has been a defining feature of the Moroccan Atlas Lions, it is their propensity to make the mind-bogglingly easy feel astonishingly difficult.

And so for most of the first half, there was an unassailable sense of déjà vu as Morocco kept possession and displayed masterful flow in the face of an unenterprising Mauritanian side; as Noussair Mazraoui and Achraf Hakimi thrived on both flanks; as Hakim Ziyech imposed his tempo in the midfield and gave a flavor of the kind of devastation Morocco can bring to opposing teams—especially if they are of Mauritania’s caliber—when they function as the technically gifted unit they are supposed to be.

But as the minutes drifted away and the passes and domination failed to translate into something tangible, there seemed to be a recurrence of the “all of this for that?” traditional question of Moroccan fans.

For since it unthreateningly impressed at the latest World Cup in Russia, Morocco’s story has mostly been one of laborious, last-minute, and unconvincing wins. Or, as was the case tonight, improbable draws.

For 45 minutes of the first half, and despite the utter dominance of the Moroccan side, Mauritania managed not only to neutralize the Lions’ most threatening situations, but the Mauritanians actually succeeded—however spiritedly and sporadically—to create opportunities of their own.

Which, then, is why the 0-0 scoreline at the first half was a faithful reflection of what the game had all been about by then: a disparate but equal contest between a talented but uninspired Moroccan squad and a lifeless, tepid, and yet confident and solid Mauritanian group. For Moroccan fans, the texture of the first half raises the question: How, with all the class and talent at its disposal, Morocco failed to break the Mauritanian defense?

Visibly unimpressed by their own first-half performance, the Moroccan Lions came from the break more invigorated, hungry for the opener that would have allowed them to impose their rhythm and personality.

The sheer, almost unstoppable dominance of Zieych’s creativity in the midfield and Hakimi’s winning presence on the left flank meant that the second half, like the first, was mostly a one-way traffic. Morocco grew more into the game and showed more willingness to go forward and try to unsettle the Mauritanian defensive wall.

There were more scoring opportunities for Morocco, causing more panic in the Mauritanian defense. Somehow, though, and sometimes in moments that smelt of defiant wastefulness, Morocco failed to take its chances.

By the 80th minute, even as Morocco grew more adventuresome and threatening, and Mauritania barely played, looking instead for a draw, the doubt about whether this would be yet another draw became a certain, gnawing felling that, more than a draw, it would be another worrying instance of Morocco’s unresolved goal-scoring issue.

Morocco’s Atlas Lions, for all the post-CAN talks of reconstruction, confidence-building, and prospective glory, do not appear to have developed the mentality they need to have to turn the tide.

Most markedly, as the Rabat air simmered with the unwanted promise of yet another lifeless draw from the Atlas Lions, the best thing Moroccan fans can take from tonight’s game is a consolation, sort of: First that this is a team with a new coach that needs some adjusting and adaptation time.

Second, that one good thing is that the Lions will not have the misfortune of meeting a strong side in their group, Burundi and the Central African Republic being the group’s other two teams.

And third, that perhaps the Ruud van Nistelrooy’s “goals are like ketchup” witty comparison is relevant for Morocco. The hope is that, with the experience and creativity that this Moroccan side boasts, goals may become floodgates when (or if) they finally start scoring. But that is only a hope, meaning that realizing it calls for the type of urgency and efficiency that has left Morocco since their pre-World Cup friendly games.