If TAS’s last year’s transition to Botola 2 (Morocco’s second football league) announced big things to come, today’s victory should seals the Casablanca team’s return, however brief, to a very restricted circle of teams that have won something of significance. 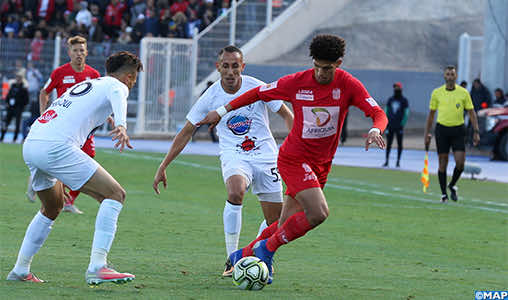 Rabat – Tihad Athletic Sport of Casablanca, or TAS Casablanca, as the Hay Mohammadi (a Casablanca suburb) football team is known, has just made history by winning its first ever trophy. The Casablanca team beat Hassania Agadir 2-1 in the much-anticipated Throne Cup final.

In a match whose outcome Moroccan sports commentators had said “was bound to be historic”—neither Hassania nor TAS had won a Throne Cup before–the gods of football sided with the lesser known of the two contenders.

The Agadir team is one of the established names of the Botola (Morocco’s first football division), having won the national league twice and maintained its spot in Morocco’s division over the years.

TAS, meanwhile, although one of the oldest Moroccan teams,  only had its good old days, the hectic 1970s and 1980s performances to showcase to its most faithful fan base.

In the Moroccan footballing world of the past decade, TAS’s stars went from pale to totally absent, as Casablanca’s Raja and Wydad dominated Morocco’s footballing scene and even converted some—or perhaps most—TAS fans in the duo’s race for hearts and minds in Casablanca.

But at the Oujda stadium today, hundreds of TAS fans from the Hay Mohammadi neighborhood came to support their “talismanic” team, travelling over 600 km to witness what could be a historic moment for the local team. The gods heard their prayers.

In the end, after a tense 1-1 first half draw, a VAR intervention helped the Casablanca team secure a penalty that would allow them to send home the second, winning goal. The Agadir team’s numerous attempts at equalization failed to bear fruit, leaving TAS players, staff, and fans to celebrate the team’s first ever success story.

Beyond the symbolic significance for fans and players alike, who now have something to boast with, the importance of the win is immediate. It means great openings and, if the momentum is well used, the opportunity to feature in even bigger, more historic, moments.

Having stagnated in the “honorary league” (third division) for decades and only loved by a handful of fans whose sincere affection was not exactly enough to carry their team through years of sporting hardships (including humiliating defeats by superior opponents and the glamour of two other teams from the same city), the Hay Mohammadi club now knows what victory tastes like.

Whether this “historic win,” as the club’s management has called it, will serve as a springboard to make other, bigger dreams possible, remains to be seen.

If TAS’s last year’s transition to Botola 2 (Morocco’s second football league) announced big things to come, dreams to potentially come true, today’s victory should seal the Casablanca team’s return, however brief, to the restricted circle of Moroccan teams that have won something of significance, something tangible to take pride in.

With the MAD 2.5 value of the trophy and the qualifying ticket for the African Confederation Cup, fans of the now little Hay Mohammadi team can be pardoned to dream of seeing their team become one of the big Moroccan teams, rivaling, like with the likes of Wydad and Raja, like in the good old days.

Meanwhile, as TAS fans flaunted their satisfaction and delight at the final whistle in Oujda, Hassania of Agadir fans, who had Afriquia, the team’s official sponsor, put buses at their disposal for the final, looked dejected and out of place. The Agadir fans were especially angry as this was the third time that their team lost a Throne Cup final.