ONCF’s director-general said the high-speed train is “very profitable,” but it is not clear if it has begun to pay off its heavy debts.

Rabat – Morocco’s high-speed train is on track to having carried 3 million passengers in 2019, said the director general of the National Office of Railways (ONCF), Mohamed Rabie Khlie.

Speaking at a press conference in Rabat on Wednesday, November 20, Khlie reported that the high-speed train had already carried 2.5 million passengers from January to the end of October, according to La Nouvelle Tribune.

In an interview with CNN at the time of the train’s inauguration, Khlie projected 3 million passengers in the first year and, starting in 2021, 6 million annually.

The high-speed train, called Al-Boraq, began running in Morocco just over one year ago. French President Emmanuel Macron travelled to Morocco to inaugurate the train with King Mohammed VI and ride in it for its maiden voyage. The train is Africa’s first high-speed rail.

The train makes stops in just four stations in Casablanca, Rabat, Kenitra, and Tangier. A trip from Casablanca to Tangier on Al-Boraq takes only 2 hours and 10 minutes.

What about the debt?

Khlie estimated that one of the train’s contributions is in preventing road accidents. By passengers taking the train instead of cars or buses, Morocco likely saw 150 fewer road accidents this year, Khlie explained.

Khlie said the train’s cost per kilometer is “the most competitive in the world.” ONCF sells just 15% of Al-Boraq tickets online, but the percentage has markedly increased since online sales launched.

The director general reported that Al-Boraq’s revenues have covered all its operating expenses, saying, “The project is very profitable.”

Morocco borrowed heavily from France to launch the €2 billion high-speed rail project. The governments of Saudi Arabia, Kuwait, and the UAE also gave funding for the rail line. While Al-Boraq’s revenue is paying for its operating expenses, it is not clear if it has begun to pay back its large debts.

Morocco planned the launch of Al-Boraq for December 2015. After years of delays, it made its first journey on November 15, 2018. 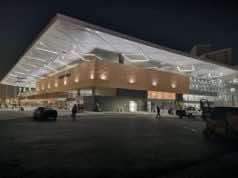 ‘This is Morocco’: Despite Grand Development Projects, Problems Persist