The MPs’ reaction came after they met with a delegation of civil society members from Moroccan Sahara on Wednesday, November 20.

The Moroccan delegation included Dahi Aguai, president of the Association of Polisario Missing Persons (APDP), and Jmaiaa Yassine, a member of the association and a victim of the Polisario’s atrocities.

During the meeting, the delegation gave the MPs on the committee an evidence file, outlining atrocities carried out by the Polisario Front in the Tindouf camps.

The file, according to MAP, included detailed information on forced disappearances, as well as photos that evidence cases of torture. Documents in the case file also listed the names of the perpetrators of human rights violations. Several Polisario leaders featured on the list.

The delegation also presented their first-hand experiences of the situation on the ground, outlining serious human rights violations against the Sahrawi population, MAP reported.

The testimonies from the delegation included abductions, brutal methods of torture, and the oppressive practices that the Polisario Front exercise on Sahrawis. The delegation also underlined cases of forced disappearance and missing persons.

The meeting served as an occasion for the MPs to directly learn from victims of the Polisario’s atrocities as well as to better understand the conditions of the Sahrawi people living inside the camps.

In a statement to MAP, Sanchez said that the meeting was an opportunity “to understand the realities of the lives of Sahrawis trapped in inhumane conditions in the Tindouf camps.”

She added that the meeting allowed the committee “to understand the various forms of torture [used by the Polisario] and their consequences on the lives of the victims.”

The initiative, according to the government, also insists on respecting the cultural identity of the Sahrawi population while also respecting Morocco’s territorial integrity.

The Basque Country gained autonomy under Article 2 of the 1978 Spanish Constitution. The region has its own Parliament, language, and distinct culture but remains under the sovereignty of Spain. 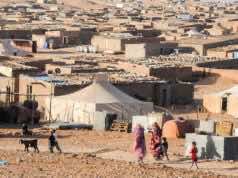