Terrorist groups may co-opt environmentalism as propaganda. A US president fuels propaganda with climate denial.

Drought accelerated Syria’s 2011 descent into civil war and pursuant ISIS occupation. Resource shortages, economic devastation, and political fragility framed “a perfect breeding ground for jihadist extremists who both benefit from livelihood insecurity and water shortages to mobilize combatants,” according to a 2016 report commissioned by the German government. Water remains a strategic weapon in this fighting today.

Terrorist propaganda: ‘We are environmentalists’

NSAG propaganda tactics have a long history of falsely co-opting the environmental agenda. The move can garner support from people in desperate need, especially given environmental degradation. NSAGs also adopt environmentalism to incite animosity towards their enemies who contribute to climate change.

One such message came in a 2007 video to the American people: “The life of all mankind is in danger because of the global warming, which is largely due to emissions of the factories of the major companies; nonetheless, the representatives of those companies in the White House insist on not observing the Kyoto Accord, notwithstanding … the death and displacement of millions of people.” 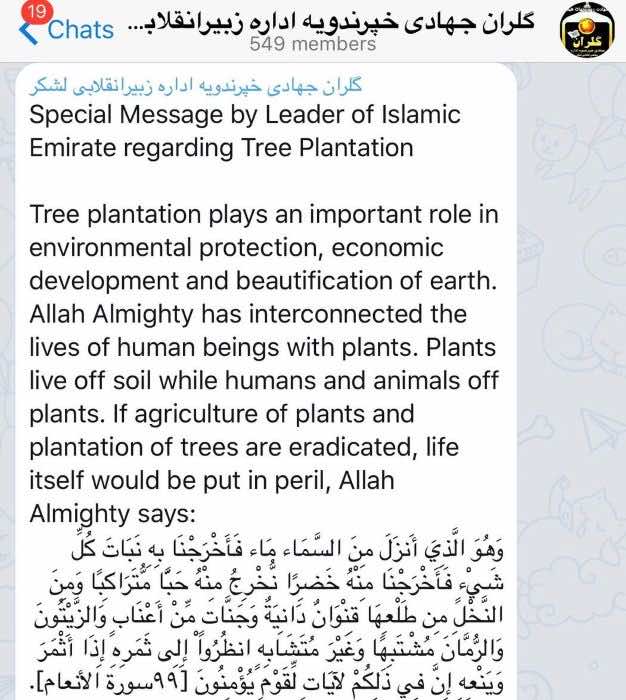 The Taliban sent Afghans a social media blast to support reforestation in 2017. Taliban spokesman Zabihullah Mujahid explained the rationale to a Vice reporter:

“The US invasion destroyed many sectors of Afghanistan, including the environment, in a very bad way and for the long term…. The Islamic Emirate of Afghanistan has the perfect plan for environmental protection through planting trees. Every citizen of the country should plant at least one tree a year.”

In light of environmentally-destructive terrorist activity, the messages can only be seen as propagandist public relations.

Al-Shabaab banned single-use plastic bags in July 2018, labeling them “a serious threat to the wellbeing of humans and animals alike.” Yet the group is known for profiting from high-polluting charcoal sales and illegal trafficking in ivory. Aside from a public relations boost, the campaign also served to save the group’s livestock tax revenues.

Read also:Morocco to Plant 50 Million Trees in a Day

Despite the Taliban’s calls for tree-planting, the insurgents have deforested huge swaths of Afghan land to profit from timber and charcoal sales. Again moving beyond a public relations boost to combat strategy, reforestation can help insurgents escape drones under cover of trees.

Terrorist groups may call themselves eco-defenders. But, ultimately, NSAG bombs destroy infrastructure and the natural environment to a devastating degree.

Climate denier US President Trump has been quick to condemn climate activism. The president is infamous for calling global warming a Chinese hoax to undermine American industry.

President Trump dismantled several Obama-era climate policies to curb fossil fuel emissions. He also announced intent to withdraw the US from the Paris Agreement and disavowed the US’s 1,500-page National Climate Assessment, compiled and released by his own administration in November 2018.

Divisive campaign rhetoric labeled climate concerns as attacks on American workers and jobs. Promises to “bring back big coal” and mining jobs helped Trump win states such as West Virginia and Kentucky. Yet coal plants have continued to close under his presidency, and mining jobs have stagnated.

Energy Information Agency projections show that coal use will decline under Trump’s presidency more than it would have declined under Obama’s Clean Power Plan.

Many US states who will suffer the greatest economic losses from climate change voted for Trump in 2016, according to a January report from the Brookings Institution.

Trump’s fight against climate justice is propaganda because it does not produce legitimate results in the way it produces votes.

The president’s newly appointed head of a committee aiming to discredit climate science, William Happer, has spewed climate propaganda on a staggering scale. The denier argued that carbon dioxide is important for the atmosphere and compared the climate justice movement to the Holocaust.

William Happer is set to lead a Trump panel on climate change: https://t.co/KNJKpO4A4t

There is an argument for Trump’s climate policy as criminal action. Ruth McKie, lecturer in criminology at De Montfort University, recently explained how Trump’s anti-environmental tactics mirror criminal behavior. This follows years of debate on how misrepresenting climate science could constitute criminal negligence.

But does criminal negligence go so far as to sponsor terrorism? A Middle East Eye contributor shared a stronger view: “Should Trump break his country’s promise to cut greenhouse gases, he will go down as the world’s greatest single sponsor of global terrorism,” wrote CJ Werleman.

Like climate change itself, at the very least Trump’s climate policies and rhetoric serve as a threat multiplier.

An unlikely voice champions the unobscured reality of climate change

Some political actors are eager to manipulate the facts about climate change. But, no matter how much propaganda is spewed, the facts remain the same. Greta Thunberg is famous for holding fast to science in her climate activism. The Swedish teen addressed a US Senate climate task force in September.

Thunberg’s amplified voice calls for an end to the propagandist approach to climate change. Taking a vastly different tactic than NSAG leaders or President Trump, it may be young people that give climate change the legitimate spotlight it deserves.