Despite the reports of abuse and exploitation, seasonal farming opportunities in Spain continue to attract hundreds of Moroccan women annually.

Rabat – The selection process for Moroccan seasonal workers hoping to be taken on for the red fruit harvest in Spain will kick off in early December.

The process was due to take place in mid-November, Huelva Informacion reported. However administrative issues on the Moroccan side delayed the campaign launch. The Spanish news outlet said that the aim of delaying the process was to improve the campaign’s management.

Every year hundreds of women travel from Morocco to Spain, particularly Huelva, to participate in the red fruit harvest.

Several women, however, have reported sexual harassment at the hands of their Spanish employers.

Over the past two years, there have been numerous complaints of sexual abuse, exploitation, and unpaid labor.

Earlier this year, several women spoke out about the alleged exploitation they experienced at Huelva’s farms. The New York Times quoted a Moroccan pregnant woman who said that her manager “sexually harassed” her when she arrived in Spain to work.

She said that her manager “pressured her to have sex, promising her a better life and working conditions.”

When she refused, the pregnant woman said that her manager forced her to work harder.

Morocco set up a committee to deal with the recurring exploitation and sexual abuse complaints, vowing to prevent a repeat of previous scandals.

About 16,500 Moroccans will participate in the upcoming campaign, the Moroccan Ministry of Employment announced earlier this month.

The campaign’s Spanish organizers seek to hire 11,000 Moroccan experienced workers. The other 5,500 will be first-timers.

The first group selected will travel to Spain from December 15. The second group will leave in January, while another batch will head to Spain in mid-February.

A necessary requirement during the selection process is evidence from the workers that they intend to return to Morocco at the end of the season. 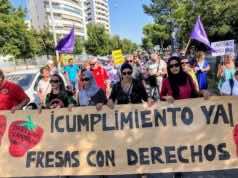 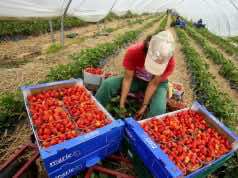