While some locals have criticized the Blue Mosque for reciting the call to prayer in Amsterdam, the reaction among residents of the neighborhood has generally been positive.

Rabat – Amsterdam’s Blue Mosque recited the call to prayer over loudspeakers on Friday, November 15, for the first time in the Dutch city’s history.

Nourdeen Wildeman, a spokesperson for the Blue Mosque, told Dutch news outlet Anadolu Agency that they were happy and honored to finally hear the Adhaan (call to prayer) after a failed attempt the week before.

The Blue Mosque planned to recite the call to prayer on Friday, November 8, but a sabotage operation left one of the audio system’s cables mysteriously cut.

While 7% of mosques in the Netherlands have been projecting the call to prayer on loudspeakers for several years, the Blue Mosque produced the first public call to prayer in the capital city of Amsterdam.

Wildeman noted that some locals have been unhappy about hearing the Adhaan but the reaction has generally been positive.

The Blue Mosque will now recite the call to prayer every Friday. The decision comes after careful deliberation with the surrounding neighborhood’s residents as well as city officials. 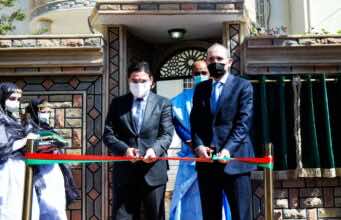